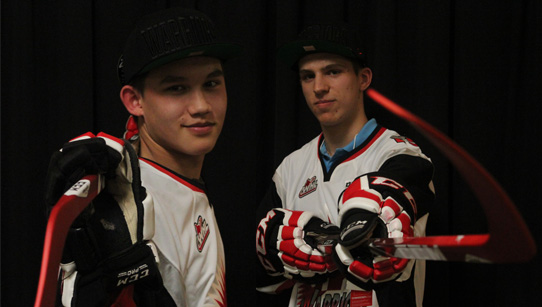 “We are very excited to add both Jett and Luka to the group of strong young players we have and are building in our organization,” said Warriors General Manager Alan Millar.  “These are two quality young men and two very exciting young hockey players.”

Woo, 5’11 190lbs, is from Winnipeg, Manitoba and played last season with the Winnipeg Bantam AAA Warriors.  Woo had 10 goals, 27 assists, and 37 points in 31 games and finished 10th in Bantam 1 East regular season scoring.  Woo was one of two under-age players at the 2015 Canada Winter Games, he recorded a goal and four points in six games, and won a bronze medal. Woo was selected 4th overall by the Warriors at the 2015 WHL Bantam Draft.

Burzan, 6’0 165lbs, is from Surrey, BC and played last season with the North Shore Winter Club in the Pacific Coast Bantam “A” Hockey League (PCBHL).  In 62 games he had 80 goals, 51 assists, for 131 points.  Burzan was selected 6th overall by the Warriors at the 2015 WHL Bantam Draft.

Woo and Burzan both competed at the 2015 John Reid Memorial Tournament in January which features the top 2000 and 2001 born players from Western Canada and the United States.  Burzan had three goals and eight points in five games while Woo had a goal and three points in five games.  Both were named tournament All-Stars, Burzan also captured the Top Forward award.

The two player’s paths crossed again at the 2015 Western Canada Bantam Championships.  Burzan had four goals and ten points, leading North Shore to a gold medal, Woo had a goal and three points and helped Manitoba capture bronze.  Both were named to the tournament’s First All-Star Team, Burzan was named Most Valuable Player, and Woo was named the Top Defenceman.

Woo and Burzan were in town this weekend for the Warriors 2015 Prospect Camp, they will return to the Friendly City in August for the team’s 2015 Training Camp.