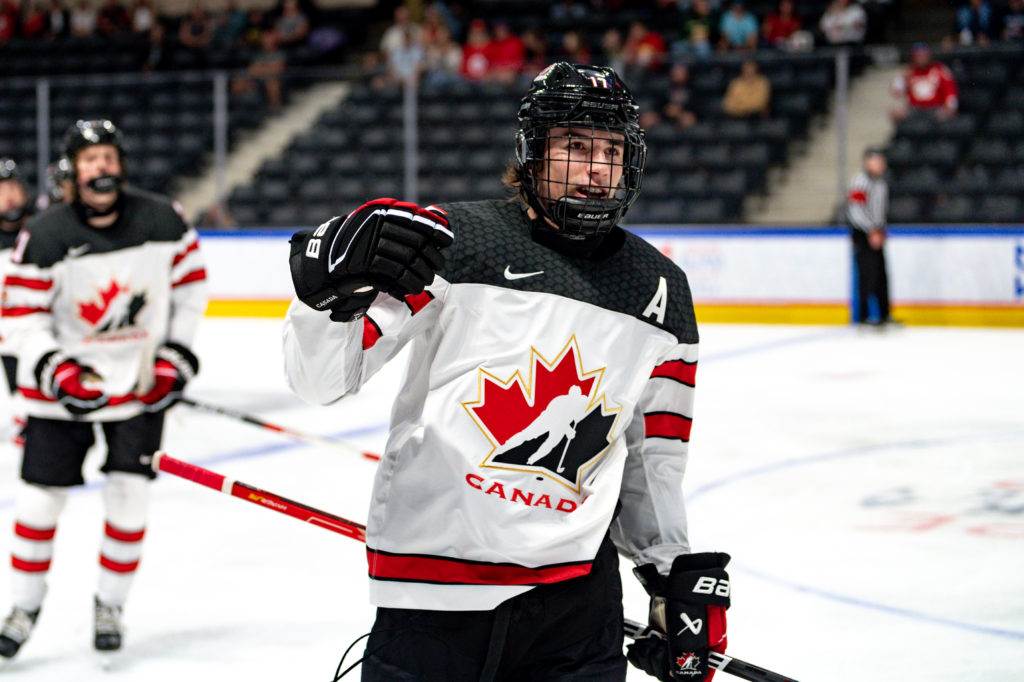 Brayden Yager did what he does best against the best players in the world.

“We had a great group of guys, so it was a super fun tournament, and obviously, winning makes it out that much better,” Yager said, who was joined on the team by Warriors goalie Jackson Unger.

Canada opened the tournament with a 14-0 win over Switzerland and never let off the gas pedal after that, going 3-0 in the round robin with a 9-1 victory against Slovakia and topping Sweden 3-0.

Yager was dominant in the round robin, posting a goal and two points in the win over Switzerland.

The Canadians would keep the momentum going into the medal round with a 4-1 win over Finland in the semifinals and then another 4-1 win over Sweden in the gold medal game.

Yager said there were some nerves going into the final, but the team was confident.

“We’d already played Sweden in the preliminary and we did a good job there, so that helped us going into the final,” he said. “We were really confident and were so happy once we got it done.”

Yager picked up his fifth goal, and ninth point, of the tournament in the gold medal win, capping off a strong tournament for the CHL Rookie of the Year.

“Once I got the first one, it kind of opened the door a little bit,” Yager said. “I just wanted to get the puck on net, they were going in for me, so I just wanted to keep getting it on net.”

The Hlinka Gretzky Cup kicks off the draft year for the majority of players in the tournament.

Yager, who is projected to be a top pick in the 2023 NHL Draft, said he felt like he matched up well with the best players in his age group from around the world.

“The 05 group in Canada is pretty special, so to have a good tournament like that and get a chance to play with all these players was pretty cool,” he said.

Yager centred Canada’s top line with Zach Benson of the Winnipeg ICE and Ethan Gauthier from the QMJHL’s Sherbrooke Phoenix.

He said the team was so deep and to be trusted with that role was an honour.

“Our fourth line could have been the first line as well, it was a really talented group and I was happy with my role,” he said. “Getting the chance to play with Benny and Goats was pretty cool, they’re two unbelievable players and I thought we had a really good tournament.”

Unger didn’t get the opportunity to play in any of Canada’s games, serving as the third goaltender during the tournament.

Yager said that didn’t stop his Warriors’ teammate from contributing to the team.

Yager was an assistant captain for Canada at the Hlinka Gretzky Cup, which he said was a great experience.

“We had so many great leaders in that room and to be a part of the leadership group was really special to me, it meant a lot,” he said. “Getting the chance to lead the group and take charge, it was really fun.”

With a gold medal under his belt, Yager’s attention now turns to the Warriors.

The 17-year-old forward said he’s bringing a lot of confidence into his second season in Moose Jaw.

“To play in a tournament like that, it’s best on best of your age group, so it gives us lots of confidence going into this season,” he said.

Yager and the Warriors open training camp on Aug. 31.