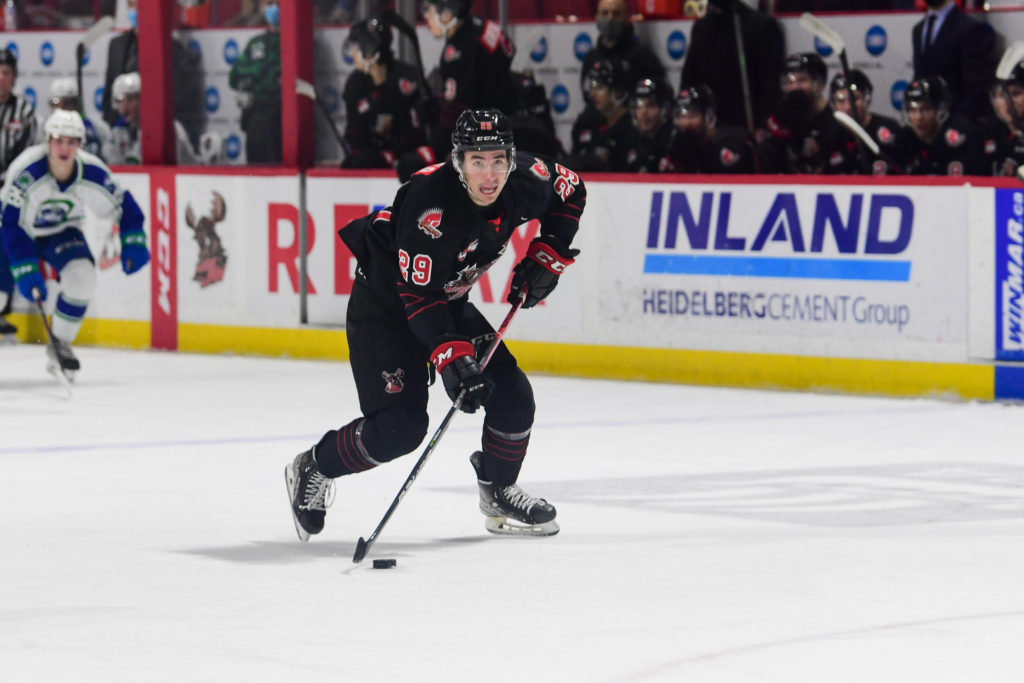 Brayden Yager broke a 37-year-old franchise record, won CHL Rookie of the Year and helped lead the team to the second round of the WHL Playoffs during his first full season in a Moose Jaw Warriors’ jersey.

What does the 17-year-old forward have planned for an encore in the 2022-23 Western Hockey League season?

“Maybe CHL Player of the Year,” Yager said with a laugh.

As a projected top-five pick in the 2023 NHL Draft, a lot of eyes will be on Yager this season. Despite the pressure that comes with that, he’s taking it all in stride and looking to have fun.

“I deal with pressure pretty well,” Yager said. “Being a pretty good player growing up, there’s pressure that comes with that and I’ve always loved playing in pressure situations, I strive for those kinds of moments.”

With Yager joined by a strong group of returning players, there are high expectations for the Warriors this season, which means some more big moments could be on the way. Yager believes the team is ready to take the next step.

“We took a big step last year, got some playoff experience and now we’re ready for a big season here,” he said.

Warriors head coach Mark O’Leary said despite Yager still being one of the younger players on the team, he will be leaned on as a leader this year as well.

“He’s a smart hockey guy and when he speaks, people listen,” O’Leary said. “He’s got a hockey sense to him that allows him to have that confidence and speak about difference experiences.”

That’s a role that Yager said he’s ready for.

“I can show leadership on the ice through my play and being a positive guy off the ice as well,” he said. “I’m super excited to take this team and do something special with it.”

Yager enters his sophomore season confident in his ability to play at a high level in the WHL. He finished with 34 goals and 59 points in 63 games during the regular season and added three goals and seven points over 10 playoff games for the Warriors in 2021-22.

“You gain lots of confidence throughout the year as you succeed and then through the offseason, I got to go [the Hlinka Gretzky Cup] and win a gold medal there, so that was pretty special and it gives me a lot of confidence coming into this season,” Yager said.

Coming out of last season, Yager’s biggest focus was adding more speed to his game.

“It’s a fast league, you’re playing against some men, so you have to play fast, play with confidence, move the puck quick and shoot the puck quick,” he said.

O’Leary said the Warriors are confident that Yager will contribute offensively, but it’s what he brings to the table defensively that make him a special player.

“He’s going to score his goals, but I know he wants to be a 200-foot player too, so continuing to develop in terms of both sides of the puck,” he said.

“He’s a driven kid that wants to be great, you watch the way he practices, works on his own game and wants to be better, wants to contribute, it’s special.”

While the draft will be on his mind during the season, Yager said he’s focused on what the Warriors can accomplish this season.

“I’m going to try and play my game, but obviously, it’s a big year and I know what’s coming, but it’s going to be a fun year,” he said. “I’m more focused on the Warriors this year and doing something special here.”

Yager and the Warriors kick-off the 2022-23 season with a home-and-home set against the rival Regina Pats. The season opens in Regina on Friday night and then the two teams come to Moose Jaw to battle in the Warriors’ home opener, presented by Mad Greek.

Saturday night gets underway with the Pre-Game Party at 5:30 p.m. on the concourse at the Moose Jaw Events Centre. Tickets are available online at mjwarriors.ca and or in person at the MJEC Box Office.