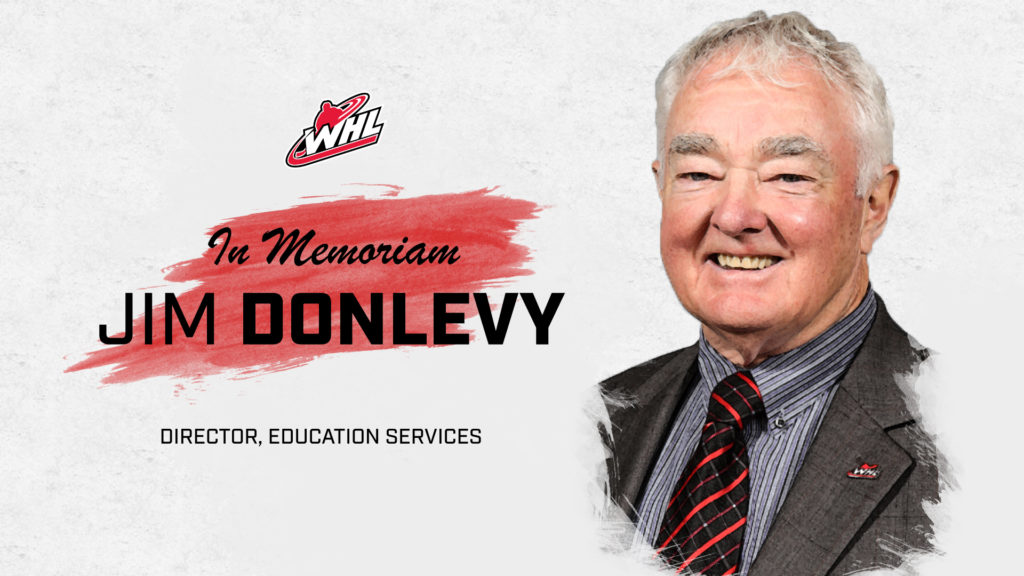 Calgary, Alta. – The WHL is deeply saddened to learn of the passing of longtime WHL Director, Education Services, Jim Donlevy, at the age of 82.

Donlevy passed away Sunday, August 4, in the company of family at the Southwood Hospice in Calgary, Alta.

Born in McLennan, Alta., Donlevy was instrumental in the creation and success of the WHL Scholarship program – the largest privately-funded amateur sports scholarship program in Canada, and one of the most comprehensive education programs for hockey in the world today. Since the establishment of the WHL Scholarship in 1993-94, over 6,000 scholarships have been accessed, totaling an investment of over $25 million by WHL Clubs.

“All of our Western Hockey League Clubs and WHL Office staff are very saddened by the passing of our friend and colleague Jim Donlevy,” commented WHL Commissioner Ron Robison. “In his role as Director of WHL Education Services for over 20 years, Jim was instrumental in establishing league-wide education standards and policies for student athletes in the WHL. Jim always took a strong personal interest, along with our WHL Club education advisors, in ensuring our players achieved their academic goals while playing in the WHL. Together with the WHL ownership and past WHL President Ed Chynoweth, Jim also played an integral role in the creation of the WHL Scholarship program.”

Joining the WHL in 1992 following an illustrious career in Canadian football, Donlevy played a key role in the establishment of league-wide education policies. This has allowed WHL players the opportunity to prioritize and accomplish academic goals while continuing to play hockey at the highest level in the Canadian development system.

Most recently in May 2019, Donlevy was inducted into the Alberta Sports Hall of Fame – credit for his work both with the WHL and as a coach and administrator of football in the province.

He was inducted into the Golden Bears and Pandas Sports Wall of Fame in 1996 following a total of 26 seasons on the gridiron sidelines at the University of Alberta.

In addition to his work on the field at the University of Alberta, Donlevy spent 15 years as the Canada West football convenor, helping shape the direction of university football through close work with the conference’s head coaches and administrators.

For all his contributions to Canada West, the athletic conference honoured Donlevy in 2016.

Donlevy was the ultimate supporter and booster of amateur sport in Canada. He served as the Mayor of Athletes’ Village at the 1983 World University Games, hosted in Edmonton. At various times, he was the president of the Alberta Football Coaches Association, Football Alberta, and the Canadian University Football Coaches Association. He also spent time as the Education Coordinator at the Kimberley Academy – an elite female hockey program based in Kimberley, B.C.

Education was always paramount to Donlevy. For two years he served as the School Liaison within the Registrar’s Office at the University of Alberta. This eventually led him to his role as Director, Education Services, with the WHL.

During his more than 20 years with the WHL, Donlevy made an incredible impact, leaving behind a legacy that will only grow with the continued success of the WHL Scholarship program. His dedication to education and amateur athletics has benefited generations of WHL players and will continue to aid future generations through the WHL Scholarship program.

The WHL wishes to extend its deepest sympathies to Jim’s wife Elaine and the entire Donlevy family.