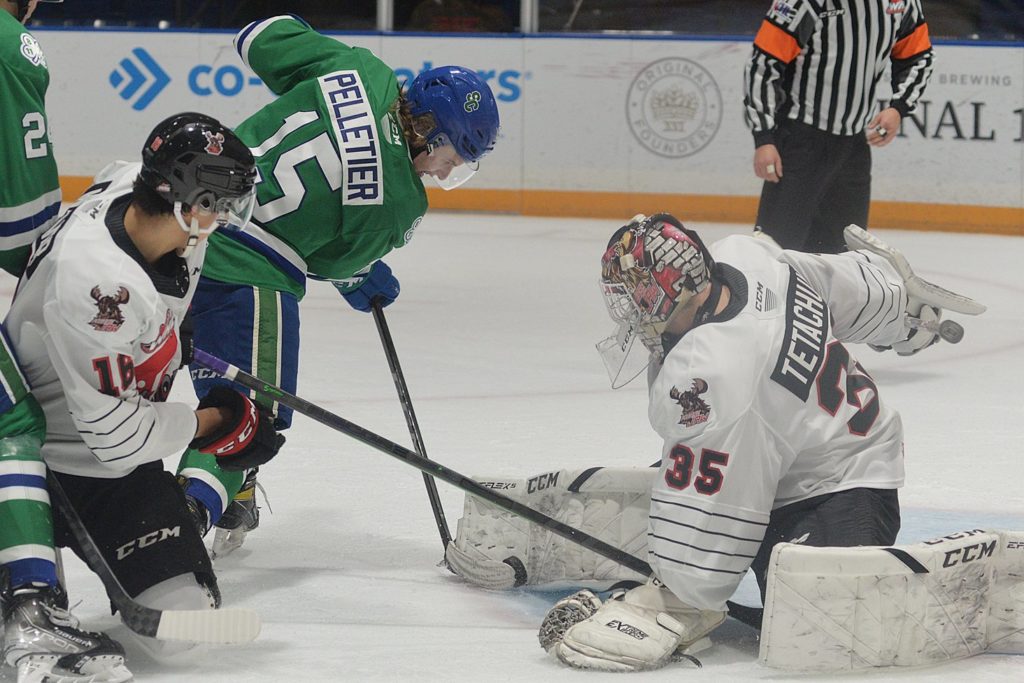 A weekend series between two long-time rivals opened Friday in Swift Current where the Moose Jaw Warriors narrowly lost 2-1 in overtime to the Broncos.

Throughout the first period, both teams had their moments to pick up the game’s first goal.

Moose Jaw won wall battles in the Broncos zone and was able to push the puck inside home plate for quality shots, while the Broncos were able to get shots off the rush and used the lone power-play in the period to toss shots on the Warriors net.

In the second period, the Warriors were not able to generate a consistent attack and had issues controlling the puck inside their zone.

Late in the middle period, the Warriors had a four-minute power-play but were unable to punch the puck past Poulter.

With 11 seconds left in the Moose Jaw man advantage and with 1:02 left in the period, the Warriors turned the puck over at the Broncos blueline.  Connor Hvidston came up the ice on a shorthanded breakaway, Carl Tetachuk made the initial save, but the rebound came to Hvidston on the right side of the net where he scored to give the Broncos a 1-0 lead.

Just over a minute into the third period, the line of Atley Calver, Logan Doust, and Eric Alarie went to work along the Broncos boards.

Calvert and Alarie outworked the Broncos in the right corner, which allowed Alarie to come out with the puck.  The 18-year-old put the puck to the top of the Swift Current crease where Logan Doust tipped in his third goal of the season.

The teams exchanged opportunities for the rest of the regulation but neither was able to pick up a go-ahead goal, which propelled this contest into overtime.

56 seconds into the extra period, Broncos defenceman Owen Pickering picked up a loose puck inside the Moose Jaw left circle.  The 17-year-old was able to snap a shot past the glove of the Warriors goalie, giving Swift Current the narrow win.

Carl Tetachuk finished with 31 saves while the Broncos’ Isaac Poulter made 30.  Moose Jaw was 0-for-3 on the power-play and 5-for-5 on the penalty kill.

This weekend series continues Saturday at Mosaic Place, tickets are available at the Mosaic Place Box Office or online at www.mjwarriors.ca.

You can catch all the action on Country 100 starting with the PreGame Show at 6:40 pm.