Weekend ends with loss to the Royals 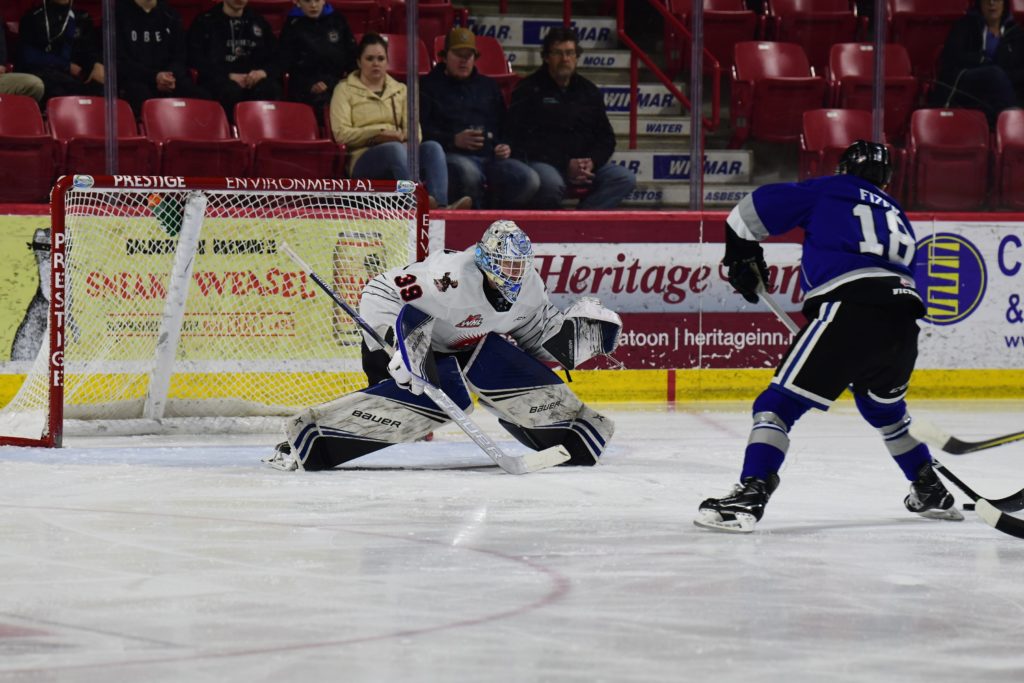 Mistakes early in the game turned out to be costly for the Moose Jaw Warriors as the Victoria Royals capitalized and went on to beat the Warriors 7-2 at Mosaic Place.

Winless in their last seven games, the Royals pushed the pace throughout the first period and were able to capitalize on Moose Jaw’s mistakes.

Close to three minutes into the game, Moose Jaw turned the puck over to Gary Haden inside their zone, Haden then let a quick shot go that found the back of the net.

Midway through the period, the Warriors were working on the power-play but it was the Royals that got the early rewards as Kaid Oliver intercepted a Warriors pass and then snapped a shot past goalie Brock Gould to make it 2-0.

Still on the man advantage, the Warriors were able to respond 38 seconds later at 10:45.

Logan Doust had the puck on top of the right circle and moved it cross-ice to Calder Anderson inside the left circle.

Anderson looked towards the net and made a pass towards the right goal line where Eric Alarie directed in his fifth goal of the season to get the Warriors on the board.

Down a goal and back on the power-play, the Warriors were not able to keep the puck inside the Victoria zone.  Royals veteran Tarun Fizer dug the puck away and skated into the neutral zone and then sprung Brandon Cutler who finished the rush with Victoria’s second shorthanded goal of the game to make it 3-1.

The pace slowed down in the second period as both teams cut down time and space for the skilled players to create offensive opportunities which led to just nine shots in the period.

Victoria added to their goal total with four and a half minutes left in the period when Brandon Cutler let a shot go that went off a Warrior stick and over Brock Gould and into the back of the net to make it 4-1.

Moose Jaw had a strong start to the third period.

The line of Bryden Kiesman, Kade Runke, and Atley Calvert battled the Royals below their goal line four minutes into the frame.

Calvert dug it away from the Victoria defender and set up Runke inside the circle where he blasted a shot to the back of the net to pull the Warriors to within two.

Moose Jaw had momentum but the Royals silenced that two minutes later with a power-play goal from Carson Miller to go up 5-2.

Victoria would go on to add two more goals later in the frame and handed the Warriors a 7-2 loss.

Coming up next week, the Warriors head to Winnipeg Wednesday for another clash against the ICE.  Catch all the action from Wayne Fleming Arena starting with the PreGame Show at 7:10.

Next weekend is a busy one for the Warriors.

On Friday, February 7th, they will induct Chris Armstrong, Harlan Anderson, and Lorne Humphreys into the Conexus Warriors and Legends Hall of Fame in a ceremony at Mosaic Place.

After that, the Warriors head on the road for a 6-game in 12-day road trip through the U.S. Division and Central Division.