Warriors top Brandon in a shootout 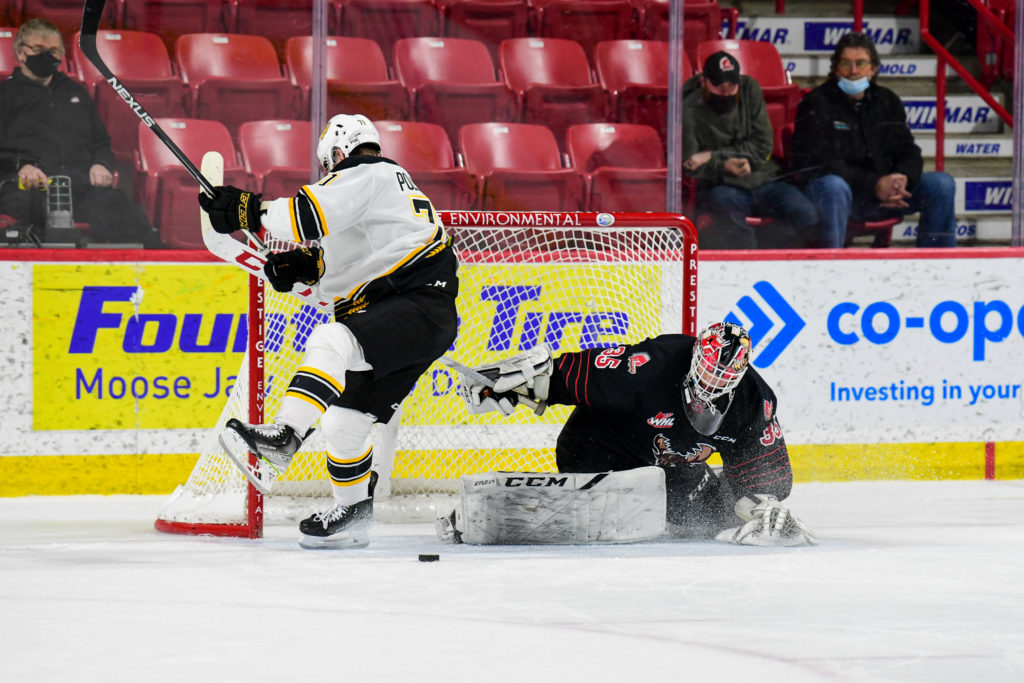 The Moose Jaw Warriors secured a big two points with a 4-3 shootout win over the Brandon Wheat Kings at Mosaic Place on Tuesday night.

Eric Alarie had a goal and two points, while Logan Doust and Atley Calvert also found the back of the net in the victory.

After the scoreless opening period, the Wheat Kings struck early in the second when Marcus Kallionkieli scored just 37 seconds into the period.

The Warriors turned the momentum back on their side quickly as Alarie buried a rebound in front for his sixth of the season on the power play only 1:12 after Kallionkieli’s goal.

Just past the seven-minute mark, Warriors captain Daemon Hunt was hit into the end boards by Brandon captain Ridly Greig, who received a five-minute major for interference and a game misconduct.

Hunt would leave the game, but returned in the third period.

Moose Jaw capitalized on the five-minute power play as Doust battled the puck across the goal line to make it 2-1. It’s Doust’s fourth goal of the season and his fourth in the past five games.

The Warriors would take a two-goal advantage later in the period when Calvert pounded home a rebound off the end boards for his third of the season.

Brandon came out strong in the third period and pulled within one on a goal from Riley Ginnell midway through the frame.

Nate Danielson tied the game with a power play goal with just over five minutes to play in regulation.

Both teams had chances in overtime, but couldn’t find the winner, sending the game to a shootout.

In round one, Ryder Korczak and Brett Hyland traded goals.

Both Jagger Firkus and Kallionkieli were stopped in the second round of the shootout.

Mateychuk would snap the puck past Wheat Kings goalie Ethan Kruger and Carl Tetachuk turned away Zakhar Polshakov to give the Warriors the win.

Tetachuk made 35 saves in the win for Moose Jaw, while the Warriors outshot the Wheat Kings, 39-38.

Moose Jaw was 2-for-4 on the power play and went 2-for-3 on the penalty kill.

The Warriors are now heading out on the road for three games in three nights against Calgary, Red Deer and Edmonton.

Moose Jaw’s next home game is next Wednesday when they host Brandon for a rematch at Mosaic Place.