Warriors skate to commanding win in Swift Current on Saturday 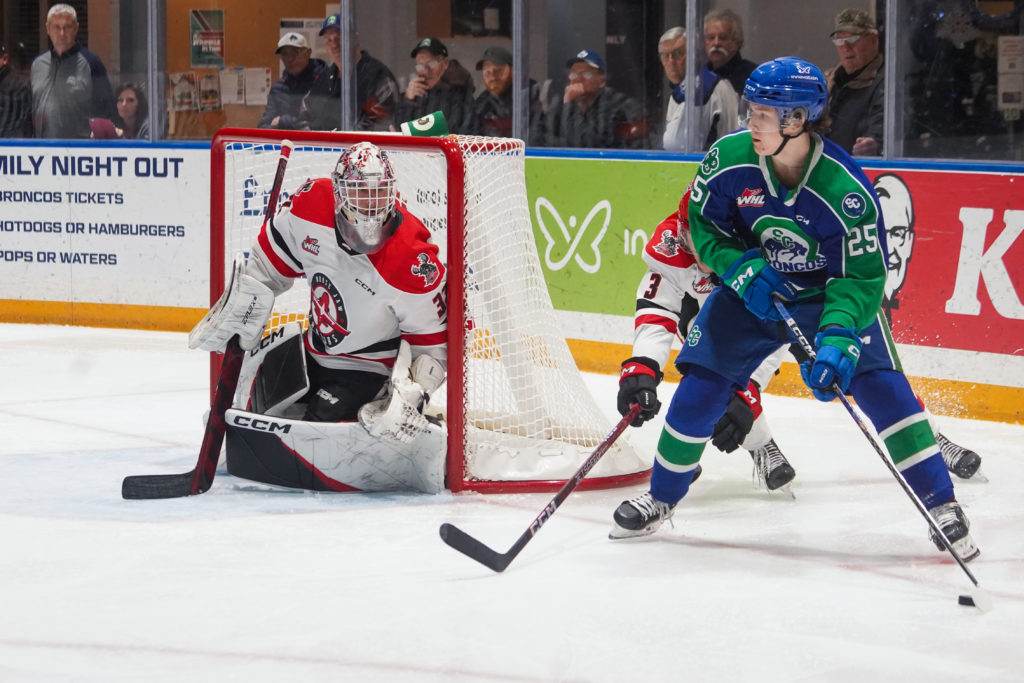 The Moose Jaw Warriors put together a complete effort from start-to-finish to complete a weekend sweep of the Swift Current Broncos.

Connor Ungar made 33 saves for his first shutout with the Warriors and Moose Jaw picked up a 6-0 win in Swift Current on Saturday.

“The first one feels real good,” Ungar said after the win. “Get to that goose egg out of there and hopefully just keep rolling from here.”

“He did an incredible job,” Warriors assistant coach Gord Burnett said. “He battled on some, he did a great job for us and obviously you see it on the scoreboard.”

Saturday’s win lifted a big money off the Warriors’ back as it marked the first time this season that the Warriors have won both games on back-to-back nights.

“It was in our heads a little bit, Saturdays weren’t going as well, so to get that one out of the way, it’s a monkey off the back and now we need to keep rolling,” he said.

“It’s been an Achilles heel of ours, but we performed better tonight, so we’re happy with that,” Burnett added. “We’ve got three back-to-backs coming up here on our road trip, so they’re important games for us.”

The Warriors started quickly, getting a shorthanded goal from Brayden Yager just 3:25 into the game to make it 1-0 after one.

Robert Baco extended the lead when he tipped home a point shot by Lucas Brenton just 2:42 into the second period.

Jagger Firkus lifted home his team-leading 12th of the season later in the period to give Moose Jaw a 3-0 advantage after two periods.

That was the same lead going into the third period that the Warriors had on Friday night against the Broncos, but Swift Current battled back to make it a one-goal game.

Moose Jaw didn’t let that happen this time around, scoring three goals in the third period to secure the win.

Nathan Pilling fired in his fifth of the season midway through the frame.

Then Denton Mateychuk buried his fifth on a rebound with just under four minutes to play.

Only 1:07 later, Josh Hoekstra sealed the win with a great individual effort for his second of the season.

“With [Ryder Korczak] back, we’ve got a lot of depth in our lineup and the boys were rolling,” Ungar said.

Korczak finished with two assists, while Yager and Hoekstra had a goal and two points each in the win.

The Warriors will now head out on the road for seven games in 14 days as they travel to the B.C. Division.

Ungar said the team has some good momentum going into the road trip.

“Technically today was the first game of the road trip, so start that off on the right foot is always good,” he said.

The Warriors will return to action on Wednesday in Prince George.