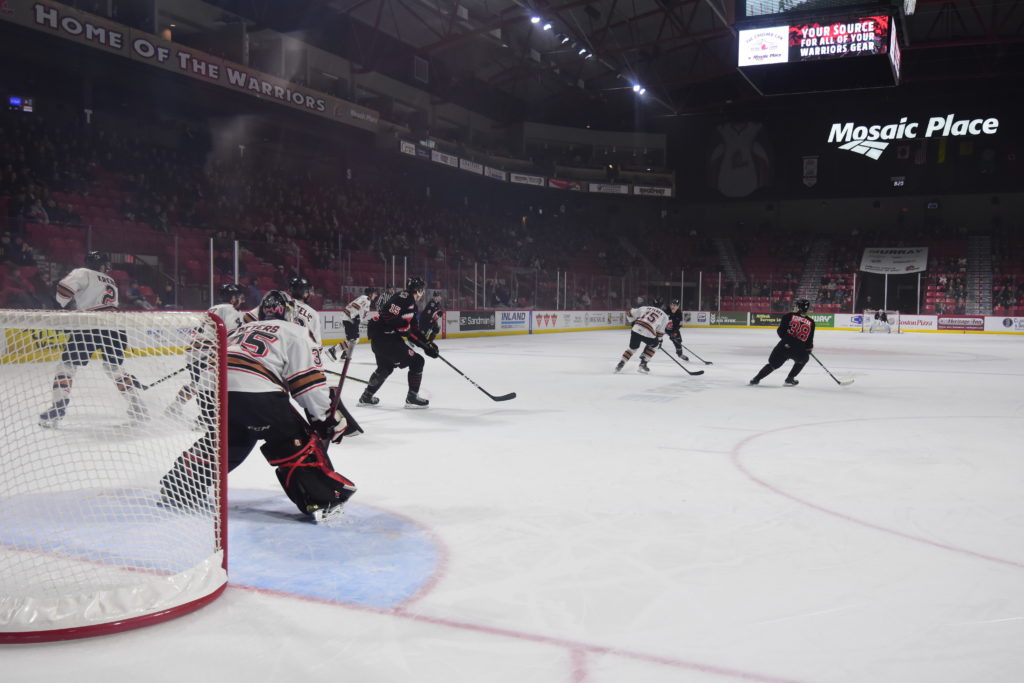 The Moose Jaw Warriors managed just 18 shots on net Saturday and fell 4-1 to the Calgary Hitmen at Mosaic Place.

The pace was fast and physical throughout the first period as the teams battled along the boards in all three zones.

Calgary outshot the Warriors 14-2 in the period, and at 10:34 they picked up the game’s first goal when a Jonas Peterek found the back of the net.

Calgary extended their lead 97 seconds into the second period when Orca Wiesblatt took a shot from the bottom left circle that snuck past goalie Adam Evanoff.

The Warriors were finally able to respond just past the six-minute mark just as a power-play expired.

Cole Jordan picked up a loose puck between the Calgary circles and put a shot past a sprawling Brayden Peters for his first WHL goal.

Calgary responded inside the final three minutes of the second period when Mark Kastelic drove the Warriors net and grabbed a loose puck and rolled in his team-leading 15th goal.

The Hitmen added another goal in the third period to put the game out of reach and handed the Warriors their fourth straight loss.

Adam Evanoff made 27 saves in net, the Warriors were 0-for-6 on the power-play and 4-for-4 on the penalty kill.

The Warriors are now off until Friday, November 29th when they will have a rematch against the Medicine Hat Tigers, only this time the scenery will change to downtown Moose Jaw.