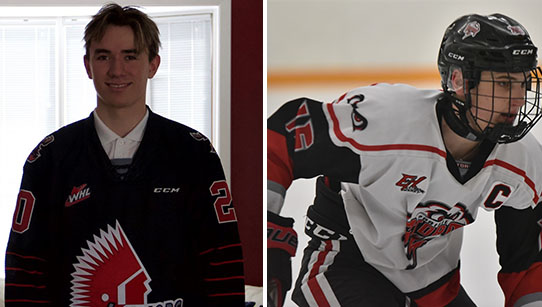 Breaking down the draft geographically, the Warriors selected five players from Saskatchewan, one from Manitoba, two from Alberta, and one from British Columbia.  Back in March, they selected forwards Cameron McEwan and Josh Halliday in the inaugural U.S. Prospects Draft.

In the 1st round, they selected forward Brayden Yager 3rd overall.  Yager, 5’11”, 165lbs, is from Saskatoon, Saskatchewan and was an underage player last season with the Saskatoon Contacts (SMAAAHL).  In 44 games, Yager finished third in team scoring with 18 goals, 24 assists, and 42 points.

In the 7th round, the Warriors acquired the 136th overall pick from Prince George in exchange for a 7th round pick in 2022.  We used this selection to draft defenceman Cosmo Wilson from the West Van Warriors (CSSBP).

Still in the 7th, the Warriors traded another 7th in 2022 to Kamloops in exchange for the 151st overall pick.  With this pick, we drafted defenceman Gavin Sawatzky from the Warman Wildcats (SBAAL), he had 11 goals and 18 points in 29 games.

In the 8th round, 156 overall, we selected Regina defenceman Keelan Mansuy.  Playing with the Regina Monarchs he had 9 goals, 31 assists and 40 points in 31 games.

In the 9th round, 178 overall, we selected forward Job Peters from Mitchell, Manitoba.  Peters played last season with the Eastman Selects (WBD1) and had 23 goals 33 assists, and 56 points in 23 games.

With our final pick in the 2020 WHL Bantam Draft, we selected forward Harper Lolacher from the Notre Dame Hounds (CSSBP).  In 27 games last season he had seven goals, nine assists, and 16 points.