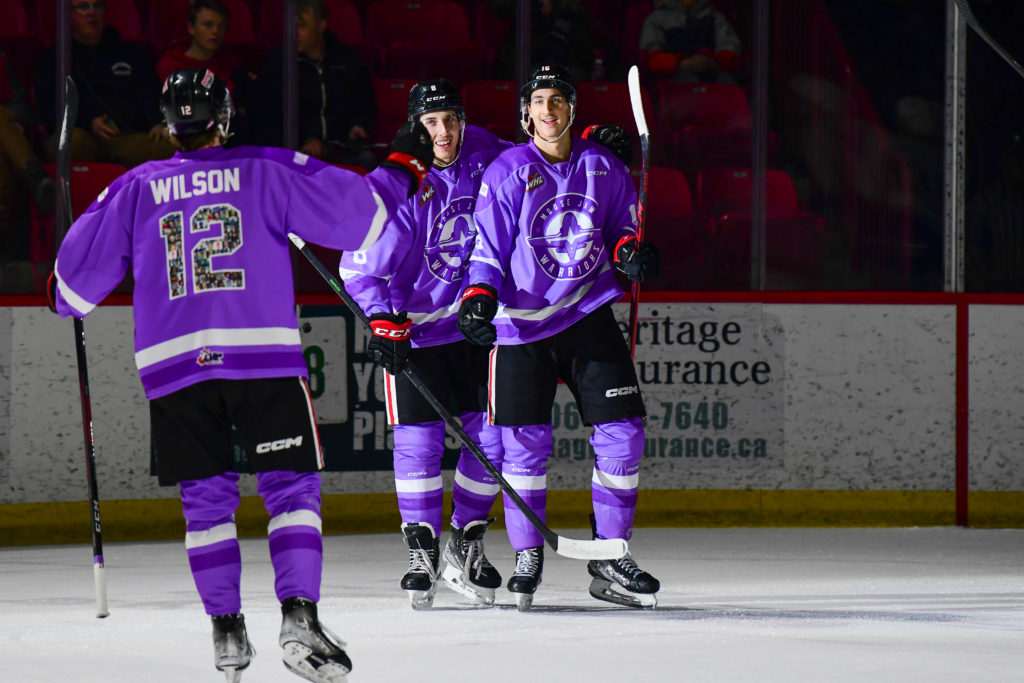 The Moose Jaw Warriors returned to the win column with a big victory on a special night on Friday.

The Warriors built up a 5-1 lead early in the third period, but allowed the Broncos to battle back to make it a tight game at the finish.

“The second period, we took control, we were looking good going into the third, but any team, you let them hang around and they get a couple of power play goals and it’s a nail bitter at the end,” Warriors assistant coach Scott King said.

“Hopefully we’re learning some lessons that you can’t play to the score, you’ve got to keep doing things the right way.”

Jagger Firkus finished with two goals in the win, while Max Wanner added a goal and two points and Denton Mateychuk had two assists.

Ryder Korczak also picked up an assist in his first game back in the Warriors’ lineup.

“It’s nice to be back,” Korczak said after the game. “A little bit rusty after a couple of days off, but once I got my feet moving, I felt pretty good out there.”

Firkus opened the scoring for the Warriors just 5:27 into the game, snapping home a shot in the slot for his 10th goal of the season.

The Broncos responded just over two minutes later, when Brady Birnie finished after a scramble in front to tie the game.

Moose Jaw answered right back as Max Wanner lifted home a backhand just over three minutes later to give the Warriors a 2-1 lead after one.

The Warriors took control of the game in the second period, outshooting the Broncos 15-5 and getting four power play opportunities, including a five-on-three for over a minute.

Moose Jaw couldn’t capitalize on the power plays, but extended their lead with an early goal from Atley Calvert, his 10th of the season, and a late one from Robert Baco, his third on the year.

King said the Warriors missed a chance to really put the game out of reach in the second.

“I thought we generated some really good looks, we had wide open nets and didn’t score, and then the five-on-three, obviously, that’s a chance to put the game away,” he said. “We’ll review that stuff and make sure we keep getting better.”

Firkus gave the Warriors a four-goal lead just 1:05 into the third period, but the Broncos pushed back as Mathew Ward scored on the power play just one minute later.

Sam McGinley added another power play goal late in the period and then Ward picked up his second of the night in the final minute, but the Warriors were able to hold on for the win.

Jackson Unger made 30 saves in the win for Moose Jaw, while Gage Alexander stopped 30-of-35 shots for the Broncos in the loss.

These two teams will finish off their home-and-home set on Saturday night in Swift Current.