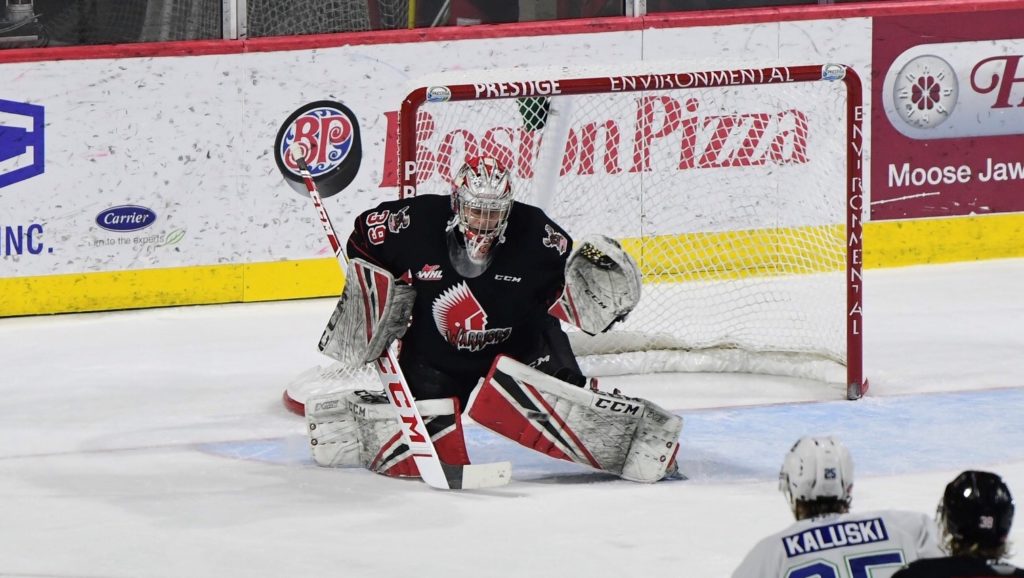 19-year-old goalie Adam Evanoff kept the Moose Jaw Warriors close but they were not able to finish on their scoring opportunities and fell 3-1 to the Medicine Hat Tigers at Canalta Centre.

The Tigers used their speed to attack the Warriors throughout the first period which led to a 17-7 advantage on the shot clock.

However, the Warriors dug in and picked up the game’s first goal six minutes in when Owen Hardy muscled his way down the Tigers right wall and was able to put a shot on deck.

Medicine Hat goalie Garin Bjorklund could not control the rebound which allowed Hardy to punch the puck over the goal line, his 9th of the season gave Moose Jaw a 1-0 lead.

The Tigers were able to push back late in the frame when they set up Nick McCarry on the right side of the Moose Jaw net where he tied the game at one.

The second period saw the Tigers put more pressure towards the Moose Jaw net.  Their speed made it for the Warriors to defend which led to an 18-5 advantage on the shot clock and goals from James Hamblin and Tyler Preziuso to give them a 3-1 lead.

Moose Jaw tried to fight their way back into the game in the third period.  They outshot the Tigers 12-9 in the frame and created some quality chances but they were not able to finish on their chances.

Adam Evanoff made 41 saves for the Warriors, on the other side of the ice, Garin Bjorklund made 23 saves.

The Warriors are back at home Saturday to take on the Calgary Hitmen.  Tickets are available at the Mosaic Place Box Office or online at www.mjwarriors.ca.

Saturday is the Warriors Wawanesa Toy Drive in support of the Moose Jaw Salvation Army.

Fans are being encouraged to bring new toys which can be handed off to a volunteer on their way to their seat.  One lucky fan who donates will win a trip for two to the Memorial Cup presented by KIA.

All toys and monetary donations stay in Moose Jaw and will go to the Salvation Army.