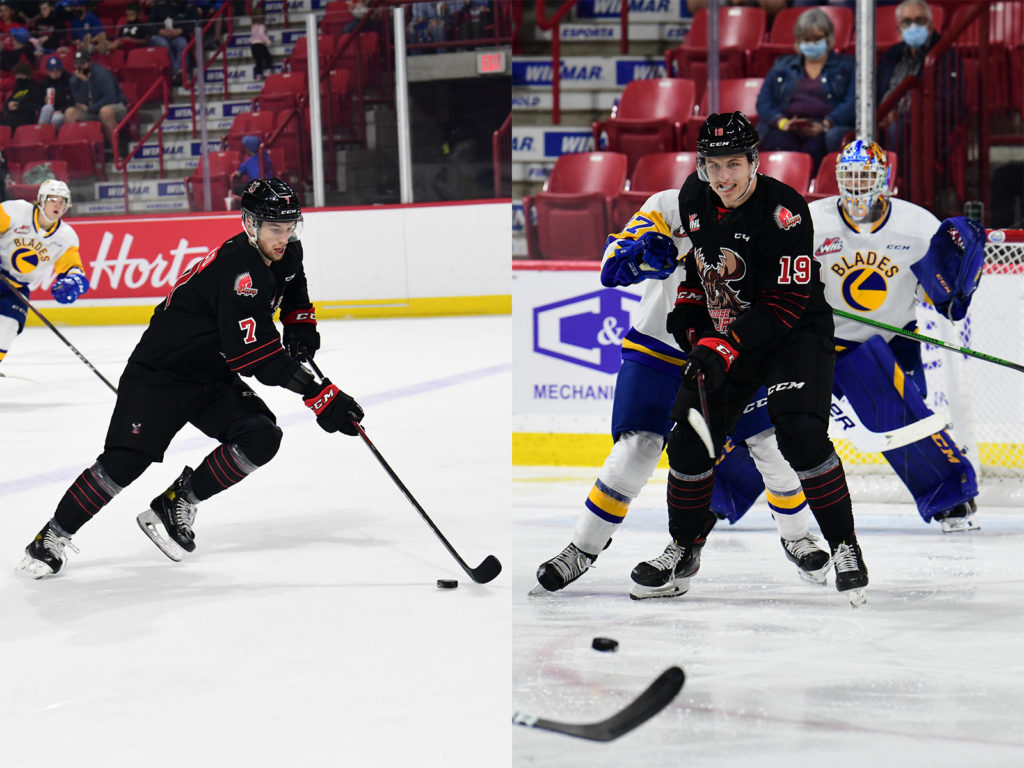 Martin Rysavy and Robert Baco are expected to be big pieces for the Moose Jaw Warriors this season, figuratively and literally.

Both players stand in at over six-foot-two and tip the scales over 200 pounds, giving the Warriors size and skill in their forward group.

“I’m a more power forward,” Baco told MJWarriors.ca. “I have advantage of big body and I can play hard, I can cover pucks and I can score goal, so I’m more versatile.”

Baco joined the Warriors late in training camp and made his impact felt immediately, scoring in the team’s intrasquad game just a day after arriving in Canada.

The Slovakian product went on to score in three of four preseason games and also showed his physical edge by receiving a one-game suspension in the preseason.

He would score again in the Warriors’ 7-1 win over the Saskatoon Blades to open the regular season.

Rysavy was selected by the Warriors with the sixth overall pick in the 2020 CHL Import Draft, but he had to wait a year to make his Warriors debut due to the COVID-19 pandemic.

During that time, Rysavy was picked by the Columbus Blue Jackets in the seventh round of the NHL Draft.

Before coming to Moose Jaw, Rysavy spent about a month in Columbus at Blue Jackets training camp.

The Czech Republic product said he had a great experience with the Blue Jackets.

“I learned a lot about myself, how to eat, how to practice, we had nutrition meetings, mental health meetings, everything about how to take care of us, it was really fun,” Rysavy said.

Rysavy arrived in Moose Jaw just a day before the team’s home opener on Oct. 1. He went from off the plane and onto the ice with the Warriors for his debut.

“It was so hard, I had like 48 hours of travel, doing stuff on immigration and I arrived late at night, so it was really hard,” Rysavy said.

Rysavy has slotted onto a line with star young forwards Brayden Yager and Jagger Firkus. He said the trio is building chemistry after playing together for three games.

“I didn’t play the last three years with many younger guys, so it’s kind of fun,” Rysavy said. “I will try to learn something and show them something I learned in Czech men’s league, national hockey team, so it will be fun.

“I hope I will help them with the draft and I figured chemistry is getting better.”

Both rookies feel like they’re playing well, but are excited to continue to grow.

“I’m playing good, but I can play better,” Rysavy said. “Give me some time because it’s a different team, different guys, everything is different and everyone needs some time to get the chance.”

Baco has been around the team longer and said he’s enjoyed getting to know his teammates so far.

“First day I came here, they were all very friendly and I didn’t expect that because I didn’t have good experience with teammates,” he said.

“It’s a smaller city, a quiet place and I like it,” he said. “I’m a quiet guy, so I like it and there’s good restaurants here.”

Rysavy and Baco will return to action with the Warriors on Wednesday night when the team plays host to the Prince Albert Raiders at Mosaic Place.