Warriors fight late but fall to the Tigers at Mosaic Place 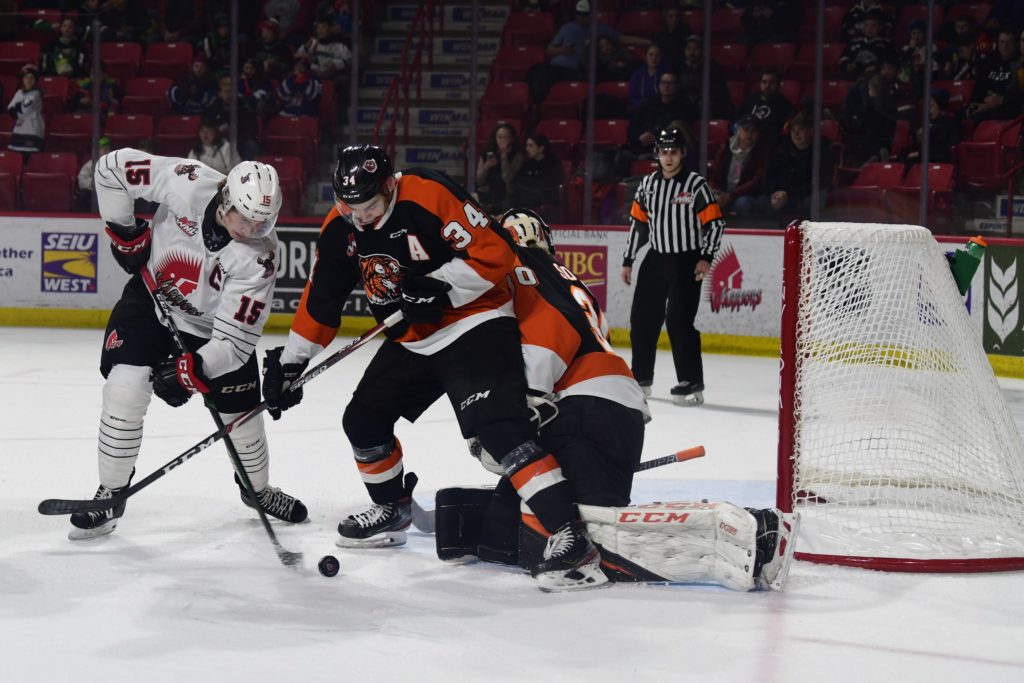 The Moose Jaw Warriors fought late but could not climb out of a 1st-period hole and fell 7-5 to the Medicine Hat Tigers Saturday at Mosaic Place.

The Warriors could not have asked for a better start to the game.

56 seconds in, Ryder Korczak fought through a check as he came down the Tigers’ right boards.  He moved the puck inside where Cade Hayes snapped a shot passed Mads Sogaard for his first WHL goal to give Moose Jaw an early lead.

Medicine Hat pulled even at 4:57 when Lukas Svejkovsky jammed at a loose puck on the right side of the Warriors net, tying the game at one.

The Tigers took the lead at 14:11 when they created a scramble on the left side of the Warriors net, Damon Agyeman knocked in the go-ahead goal for Medicine Hat.

From there, the Tigers power-play took control of the rest of the first period as they got goals from Ryan Chyzowski and Cole Sillinger to take a 4-1 lead.

Moose Jaw found a spark in the second period as they worked harder to create chances which led to a 14-12 advantage on the shot clock in the frame.

Four and a half minutes into the period, Cayde Augustine took a shot from the right blue line.  The puck bounced behind Sogaard and Cade Hayes knocked it over the goal line for his second of the game.

With under seven minutes left in the period and working on the power-play, the Warriors mishandled the puck in the neutral zone which led to a shorthanded breakaway for Brett Kemp who scored to make it 5-3.

Still, on the man-advantage, the Warriors continued to battle on the power-play and just over a minute after the Tigers scored, Ryder Korczak scored his 12th to make it a two-goal game again.

Medicine Hat silenced the Warriors momentum in the final moments of the period when Brett Kemp scored with five seconds left to put them back up by three going into the second intermission.

Four minutes into the third period, Tigers 16-year-old forward Cole Sillinger led a charge up the ice on the left side and then finished the rush with a shot to the back of the Moose Jaw net.

Despite being down by four, the Warriors continued to fight.

On the power-play with nine minutes left in regulation, the Warriors pounded to puck towards the Tigers net.  The puck rolled behind Mads Sogaard and was sitting in the crease where Logan Doust knocked in his second of the weekend.

Five minutes later, Garrett Wright came off the Tigers’ right wall and moved the puck into the high slot where he ripped a shot past the goalie to make it a two-goal game again.

Moose Jaw continued to press but was not able to inch closer and suffered the 7-5 loss.

Cade Hayes finished with two goals for the Warriors, Ryder Korczak had a goal and two points, and Martin Lang and Chase Hartje picked up two assists each.

Ryan Chyzowski led the Tigers with one goal and four points and Yorkton product Brett Kemp had two goals and three points each.

Moose Jaw is now off until next weekend when they will have a pair of home games.  Friday the Prince George Cougars are in town for the only time this season, and then Saturday the Brandon Wheat Kings return to Mosaic Place.