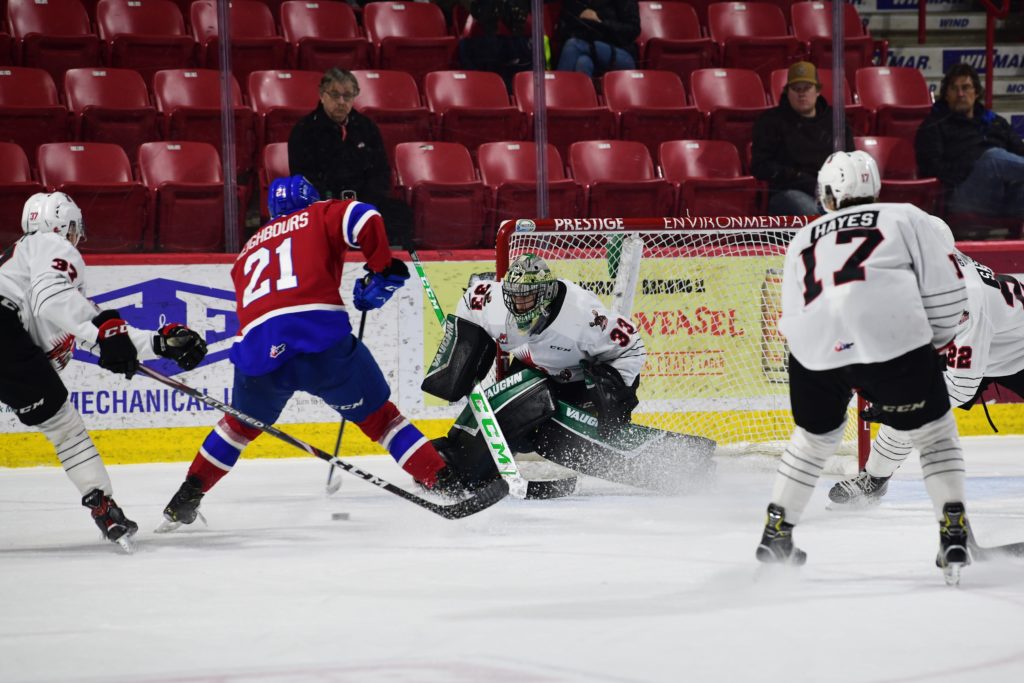 The Warriors kept it close throughout the first period despite being outshot 20-8 in the frame.

Even though they were not credited with a lot of shots, the Warriors had generated quality chances on Edmonton goalie Beck Warm but they were not able to push the puck over the goal line.

The visitors had a power-play just past the midway point of the frame and were able to get a deflection from Ethan McIndoe for the game’s first goal.

Four minutes into the second period, the Oil Kings capitalized on a bad bounce against the Warriors inside their zone.  The turnover allowed David Kope to setup McIndoe on the right side of the Moose Jaw net where he scored his second of the game.

Edmonton added to their lead at 10:03 of the second period when Brendan Kuny deflected a point shot past new Warriors goalie Boston Bilous to make it 3-0.

Moose Jaw was finally able to get on the scoreboard three minutes later.

Carson Sass took a shot from the left point that went wide of the Edmonton net.  The puck bounced off the end boards and right to Calder Anderson in the low slot where he scored his second of the season.

Edmonton got their three-goal lead back 28 seconds later when an Ethan Cap shot from the point went through traffic and found the back of the Moose Jaw net.

The Warriors responded less than three minutes later at 16:09.

Edmonton mishandled the puck inside their zone, that allowed Garrett Wright to attack and get control inside the right Oil King circle.  Wright looked cross-ice and set up Kyle Crosbie on the left side of the Edmonton net where he scored his second of the season and first as a Warrior to pull Moose Jaw back to within two going into the second intermission.

The Warriors’ strong end to the second period gave them some momentum to start the third period, but Edmonton silenced that momentum with a goal from Dylan Guenther 91 seconds into the period.

The Oil Kings added another goal from Riley Sawchuk at 7:49 to go up by four again.

In a hole, the Warriors continued to battle.

With under seven minutes left in the game, Brayden Tracey jumped on a loose puck at the bottom of the Edmonton left circle.  He drove behind the net and converted on a wrap-around to score his 15th of the season.

Moose Jaw kept pushing and pulled to within two with under 90 seconds left in the game when Owen Hardy was set up in the high-slot where he scored his team-leading 17th goal.

The Warriors pulled their goalie in the final moments to try and claw closer but the gamble backfired as the Oil Kings forced a turnover in the neutral zone which led to an Ethan McIndoe empty-net goal.

Kyle Crosbie led the Warriors with a goal and two points, on the other side, Ethan McIndoe had a hat-rick for the Oil Kings while Jake Neighbours and Samuel Stewart had three assists each.

The team is now off until the weekend when they will battle the Medicine Hat Tigers in a home-and-home series.  Friday the Warriors head west to Alberta, the series shifts back to Moose Jaw on Saturday.