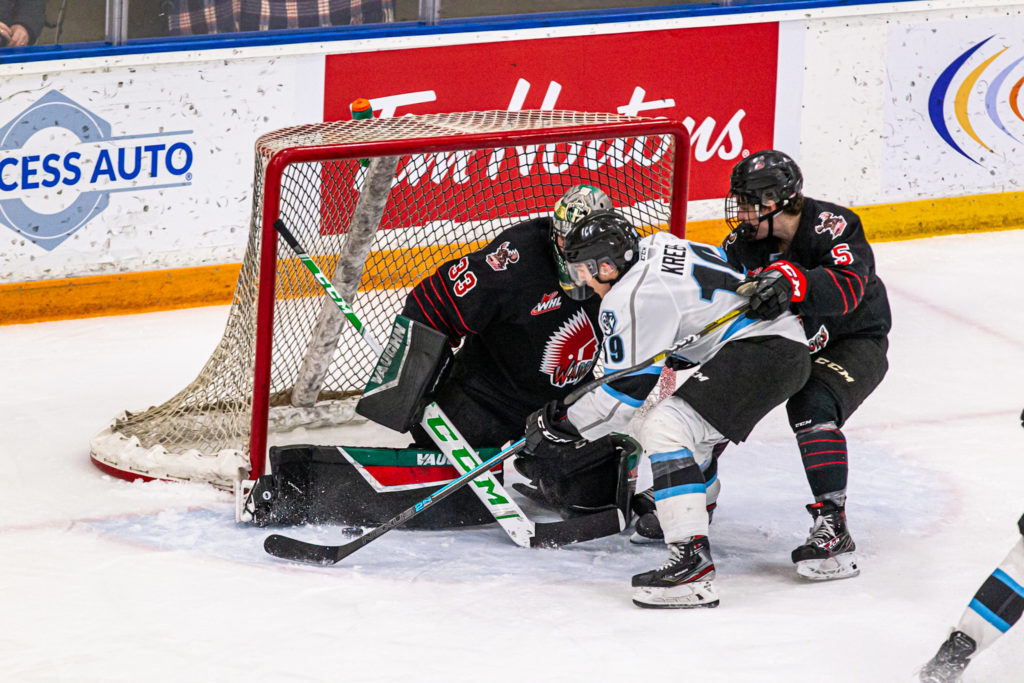 The Moose Jaw Warriors had their moments to take control of the game Wednesday in Winnipeg but they were not able to convert and fell 5-1 to the ICE at Wayne Fleming Arena.

The first period had plenty of exciting moments as both teams moved quickly up the ice on the attack and did a good job coming back defensively.

Goalies Boston Bilous and Liam Hughes were both tested through the opening period and both had to make big saves to keep the game scoreless through the 20 minutes.

The fast-paced action continued throughout the second period.  Moose Jaw had a power-play carry over from the first period, and even though they were able to create good looks, they were not able to finish.

Winnipeg opened the scoring just over three minutes into the second period with a goal from Isaac Johnson, they went up 2-0 over four minutes later with a power-play goal from Peyton Krebs.

Just past the midway point of the period, Tate Popple had the puck inside the Moose Jaw zone.

Popple looked up the ice and made a tape-to-tape pass to spring Kyle Crosbie for a breakaway.  The Didsbury, Alberta product broke in on the goalie Liam Hughes and lifted a shot past his glove to get the Warriors on the board.

Moose Jaw pushed at the Winnipeg net throughout the rest of the second period but they were not able to jam the puck in.  They found themselves down 3-1 going into the second intermission after a late ICE goal from Jackson Leppard.

In the third period, Moose Jaw had their moments to get back into the game but they could not capitalize.  Instead, Winnipeg added two more goals and went on to hand the Warriors a 5-1 loss.

The organization will now get ready for a busy weekend.

On Friday, Chris Armstrong, Harlan Anderson, and Lorne Humphreys will be inducted into the Conexus Warriors and Legends Hall of Fame in a ceremony held at Mosaic Place.

On Saturday, the inductees will be honoured at ice-level before the game against the Saskatoon Blades.  Tickets are available at the Mosaic Place Box Office or at www.mjwarriors.ca.

Then on Sunday, the weekend concludes with the Warriors final trip of the season to Saskatoon for the final game of a home-and-home series against the Blades.