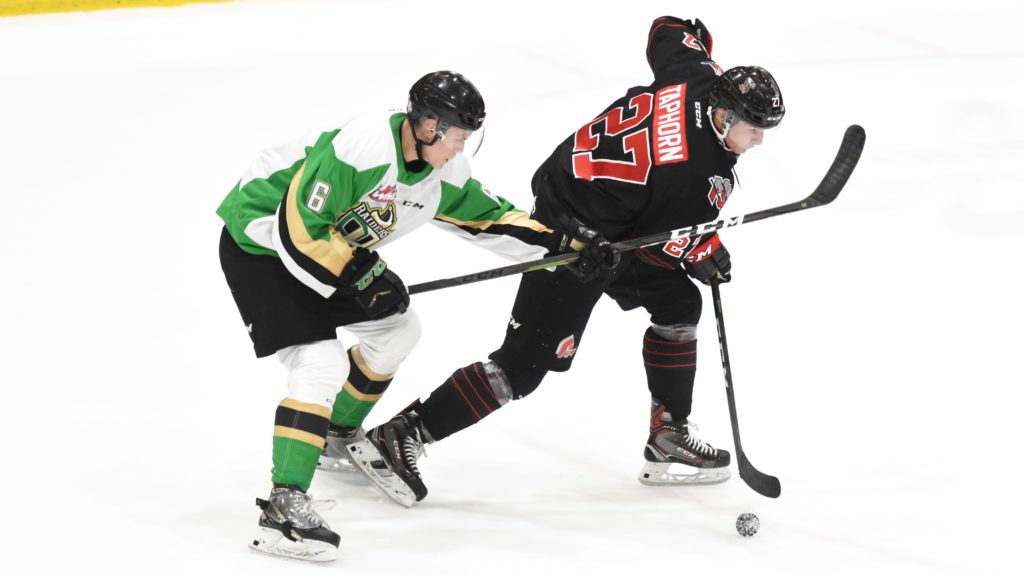 The first period was fast and heavy.  Both teams came up the ice quickly and both teams battled hard along the boards as they tried to get control inside the offensive zone.

Space to create was hard to come by throughout the opening frame due to the battles on the wall.  The teams combined for 12 shots and went into the intermission scoreless.

Moose Jaw had a strong opening shift to the second period as they charged inside the Raiders line and created a number of quality chances but they weren’t able to convert.

Instead, Prince Albert created a turnover at 1:52 which resulted in extra attack time and ended with a goal from Evan Herman.

Just over three minutes into the period, the Raiders got a shot from inside the left circle, the rebound came to Braydon Clark on the right side of the net where he made it 2-0.

A minute later, Prince Albert tossed the puck through the neutral zone springing Ozzy Wiesblatt for a breakaway where he scored to give the Raiders a three-goal lead.

The third period saw the Warriors push back.  They were quick up the ice and hard on the fore-check which led to a 15-7 advantage on the shot clock in the period and numerous scoring chances.

Working on the power-play with under seven minutes left in regulation, Ryder Korczak had the puck in the right circle and made a cross-ice pass to Eric Alarie at the bottom of the left circle where he scored his 4th of the pre-season to get the Warriors on the board.

Nine seconds later, 17-year-old rookie, Bryden Kiesman used his speed to drive down the Raider left boards and he came out at the right goal-line and set up Tate Popple on top of the crease where he scored his first of the pre-season to pull Moose Jaw to within one.

These two East Division rivals will continue their pre-season series on Saturday in Moose Jaw (7:00pm), a reminder that this is the first ticketed game of the year.  Season ticket holders can pick up their packages at the Warriors Office.