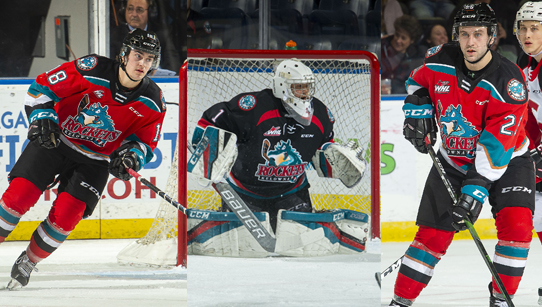 “We are pleased to add Kobe, James, and Kyle to our hockey club.  Kobe is a veteran player who brings leadership, experience, and a solid, complete game to our team.  James is an experienced WHL goaltender who gives us good depth.  Kyle is a young, skilled player who has good upside and should benefit from this new opportunity,” commented General Manager Alan Millar.

“This deal keeps our hockey club competitive this season while also benefiting our team in the future.  The additions of Mohr and Crosbie gives us added depth up front and Porter adds good depth.  The deal gives us important experience, a good young player, and an important future 3rd round draft pick,” added Millar.  “We would like to thank Jadon for his time with our hockey club and wish him the best in his career ahead.”

The Warriors acquired Joseph from the Vancouver Giants on September 14th for a 3rd round pick (2020) and a conditional 5th (2022).  In 21 games this season, Joseph has seven goals and 13 points.