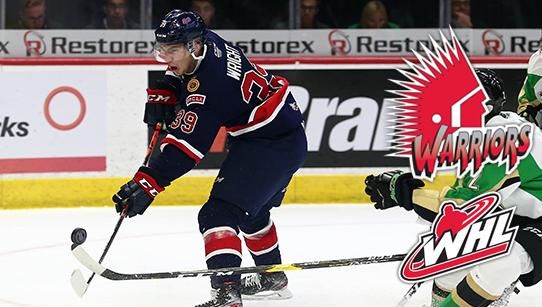 “We are pleased to add Garrett Wright to our hockey club. As an 18-year-old he fits in well with what we are building here and we believe he has a very good upside in his game. Garrett is a solid player with good skills,” commented General Manager Alan Millar.  “I’d also like to thank Carson Denomie on his time with our team and wish him the best.”

Wright, 6’1”, 182lbs, is from Mesa, Arizona and has seven assists in 17 games this season.  Last season with the Pats, Wright had seven goals, four assists, and eleven points in 63 games.

Wright is expected to join the Warriors this week as they prepare for games coming up on the weekend in Medicine Hat Friday and Saturday at home against the Calgary Hitmen.  Tickets are available at the Mosaic Place Box Office or online at www.mjwarriors.ca.