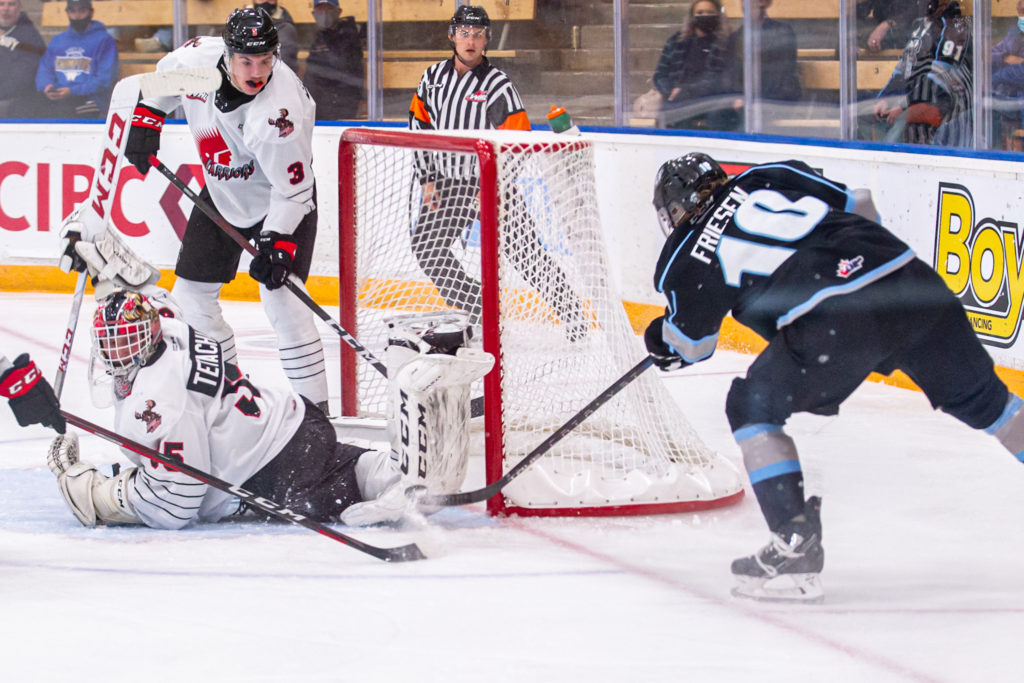 On a Wednesday night in Winnipeg, the ICE scored four power-play goals in the third period and went on to hand the Moose Jaw Warriors a 10-2 loss at Wayne Fleming Arena.

The action was fast and furious throughout the opening period as the teams raced up and down the ice looking to go on the attack.

14 seconds into the game, ICE defenceman Carson Lambos pounced on a loose puck on top of the Moose Jaw left circle and then put a shot past the glove of goalie Carl Tetachuk.

Moose Jaw responded at 4:20 while working on the power-play.

The Warriors had the puck at the left point and then moved it below the goal line.  Martin Rysavy was able to find a seam to pass the puck to Ryder Korczak in the high slot.  The New York Rangers 2021 3rd round pick put the puck over the blocker of Daniel Hauser, his third goal of the year tied the game at one.

Quick pace continued in the second period as neither team backed down offensively.

At 1:54, Winnipeg’s Skyler Bruce led a rush across the Moose Jaw blueline.  Bruce came down the left-wing and then tossed the puck towards the net where it went off Cole Muir’s skate and over the goal line to give the ICE a 2-1 lead.

Winnipeg extended their lead with 3:55 remaining in the second period when Chase Bertholet was able to convert on the right side of the Moose Jaw net.

The Warriors did not back down from the East division leaders, they outshot the ICE 12-9 in the period and were able to claw back to within one inside the final two minutes of the period when Eric Alarie scored his first of the season on a late Moose Jaw power-play.

At the end of the second period, Moose Jaw 20-year-old defenceman Majid Kaddoura was given a slashing penalty to put the Warriors down a man to start the third.  Then, 50 seconds into the third, Max Wanner was given an interference call which gave Winnipeg a two-man advantage for 1:10.

Moose Jaw’s penalty killers dug in and did a great job supporting their goalie throughout the Winnipeg power-play, keeping it a one-goal game.

Shortly after getting back to even strength, the Warriors were put on the man-advantage and they were able to create some good pressure.  However, while on the power-play at 4:55, Moose Jaw turned the puck over in the Winnipeg zone, which led to Nolan Orzeck’s breakaway and an eventual shorthanded goal to extend the ICE lead.

From there, the Warriors got into more penalty problems which led to another lengthy Winnipeg two-man advantage, which turned into power-play goals for Matthew Savoie and Mikey Milne.

As the third continued, the game got further out of reach as the ICE scored two more power-play goals and added two even-strength markers.

Moose Jaw finished 2-for-4 on the power-play while the ICE was 4-for-9.

These two teams will collide again on Saturday, only this time it will be in downtown Moose Jaw.  Tickets are available online at www.mjwarriors.ca or at the Box Office located inside of Mosaic Place.

Catch all the action on Country 100 starting with the PreGame Show at 6:40 pm.