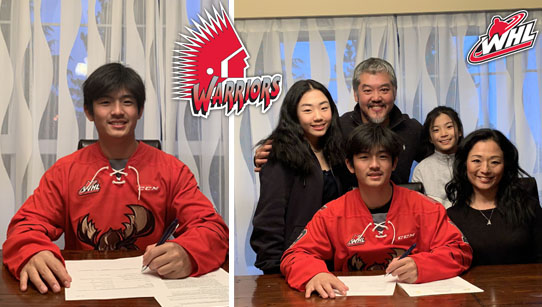 Moose Jaw Warriors General Manager Alan Millar has announced that 15-year-old forward Thomas Tien has committed to the Warriors and the Western Hockey League with the signing of a Standard Player Agreement.

“We are very excited to announce the signing of forward Thomas Tien to a WHL Standard Player Agreement.  Thomas is a very hard working, competitive player who combines a good skill set with a strong will and determination in his game and in his development,” said General Manager Alan Millar.

“We are very pleased that Thomas and his parents Ed and Anne have chosen the Moose Jaw Warriors and the WHL to pursue his hockey and academic goals,” Millar added.

“Thomas is a player with lots of speed, skill, and character,” commented Assistant General Manager Jason Ripplinger.  “He is a determined and competitive player that we want to build our team and culture around.”