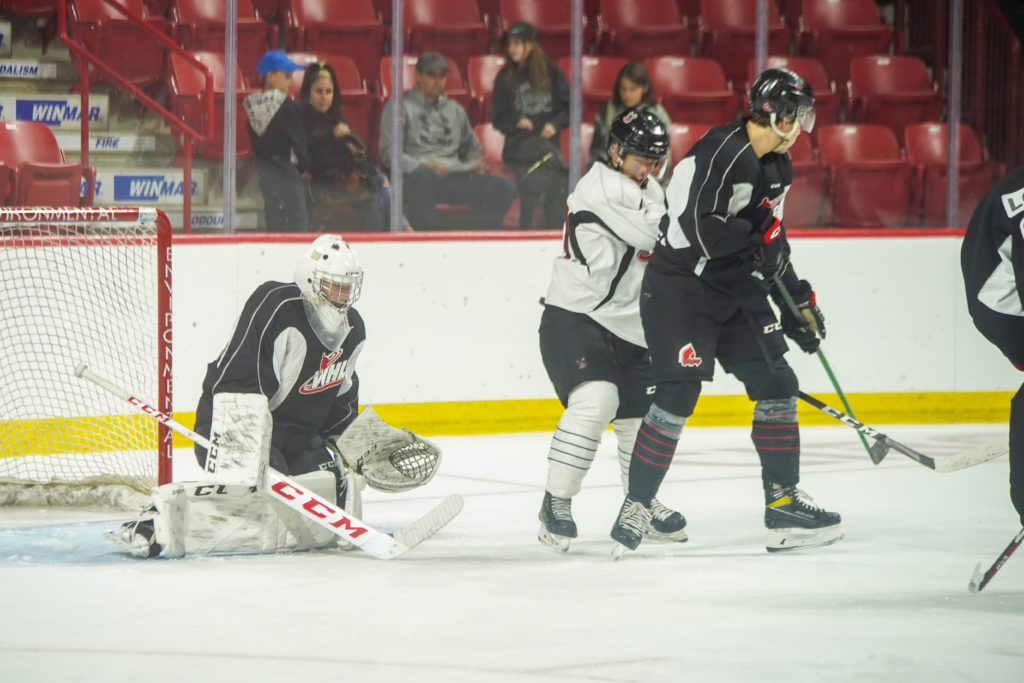 A competitive training camp came to a close for the Moose Jaw Warriors on Sunday at Mosaic Place with the team’s intrasquad game.

“What we were hoping for is a competitive camp and that’s exactly what we got,” Head Coach Mark O’Leary said after the game.

The Warriors had 42 players on the ice throughout training camp, which was their first in two years. The team saw some good battles between older and younger players throughout the camp.

“We had younger guys coming in competing for spots and the older guys knowing that we had a lot of bodies here and jockeying for position, positioning to make the team and to be on the line they want to be on, it was a competitive camp and we look forward to building on it,” O’Leary said.

Jagger Firkus continued his strong camp in the loss for Team Black, scoring two of its three goals.

“I thought for forwards, he was the best forward for all of training camp,” O’Leary said.

Cade Hayes added the other in the loss for Team Black.

O’Leary said the team’s captain, Daemon Hunt, also put together a strong showing throughout camp, which is a good sign heading into the season.

“He looks like a pro right now and that’s exciting for our team,” he said. “It should be a lot of fun for fans to watch a guy like Daemon take his game to the next level.”

Niven opened the scoring for Team White just 2:34 into the first period, but Team Black answered later in the period when Firkus found the back of the net to tie the game at 1-1 after one.

Firkus answered again for Team Black as he wired a wrist shot past goalie Cameron Doucette from the top of the circles to even the game at 2-2.

The back-and-forth continued in the third period as Doust put Team White back in front, scoring on an odd-man rush to make it, 3-2.

Import forward Robert Baco, who arrived in Moose Jaw on Saturday, picked the top corner on Unger to put Team White in front 4-2 with 6:23 left int he third period.

Team Black responded under a minute later as Cade Hayes fired a shot past Doucette to cut the lead back down to one.

Doucette and returning goalie Brett Mirwald combined to make 21 saves in the win for Team White, while Unger and 20-year-old netminder Carl Tetachuk turned away 23 shots in the loss for Team Black.

With training camp now in the rearview mirror, O’Leary said the team is looking forward to squaring off with another team when the Warriors open the preseason on Tuesday against Brandon.

“It’s been a long time and I know these guys are probably sick to death of playing against each other and we’ve got a lot of games this past week, so it will be nice to see a different colour jersey,” he said.

The Warriors and Wheat Kings face-off at 7 p.m. on Tuesday at Mosaic Place. Admission is by donation to the Canadian Mental Health Association.