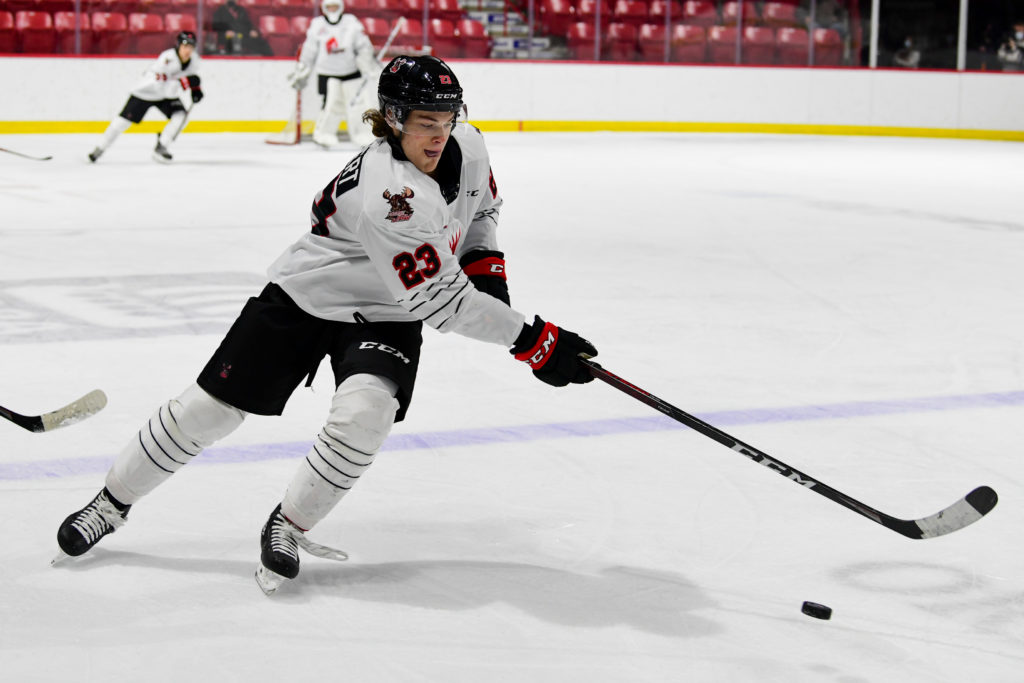 After sitting idle for 13 days, the Moose Jaw Warriors will return to game action with a busy weekend.

The Warriors host the Medicine Hat Tigers and Winnipeg ICE on Friday and Saturday, respectively, and then head to Regina for a Sunday afternoon tilt with the Pats as part of a three-in-three stretch.

“It’s exciting,” Warriors head coach Mark O’Leary said after practice on Thursday. “The enthusiasm, the excitement to get back and compete again is felt throughout the locker room.”

The Warriors were among 15 teams in the Western Hockey League that had team activities paused in early January due to COVID-19 protocols.

That meant that the Warriors were off the ice for a week before returning to regular practices on Monday.

The team has used the week to get back into game shape and ready for a busy weekend.

“We look better now than e did a couple days ago,” O’Leary said. “We’re not looking for perfection, we’re just trying to execute the best we can and as long as we’re doing the details as right as we can in the right moments, we’ll be okay.”

The Warriors last game was a wild 7-6 overtime loss in Regina on New Year’s Day. It will have been 13 days between games for the team when they host Medicine Hat on Friday night.

Warriors forward Atley Calvert said the team is excited to get back on the ice for a game.

“We started [the week] hard with races and battles, with different drills and such and then got more into the system stuff later on in the week.”

Before protocols shut the team down, the Warriors had collected points in four straight games, including three straight wins before the overtime loss against the Pats.

The Warriors are confident that they can pick right back up where they left off.

“We’re just working and we’re competing,” Calvert said. “We’ve got to bring it every night and we know we can beat anyone, any night.”

O’Leary said the momentum from that strong stretch for the team might be gone, but they know how to get it back.

“We know that we’re a good team when we’re playing well and it’s just a matter of those details,” he said.

The Warriors have won both meetings against the Tigers this season, winning in overtime both times.

O’Leary said putting together a good effort against Medicine Hat will be key for the whole weekend ahead.

“We pride ourselves on our starts, so whether that’s within a game or within a stretch of games, we want to be a fast starting team and play from that perspective,” he said.

The Warriors and Tigers meet at 7 p.m. on Friday night at Mosaic Place.

Moose Jaw will then host the WHL-leading Winnipeg ICE on Saturday night, 7 p.m., at Mosaic Place.

The three-in-three weekend ends with a 4 p.m. puck drop in Regina against the rival Pats.

Get your tickets for both homes at mjwarriors.ca.