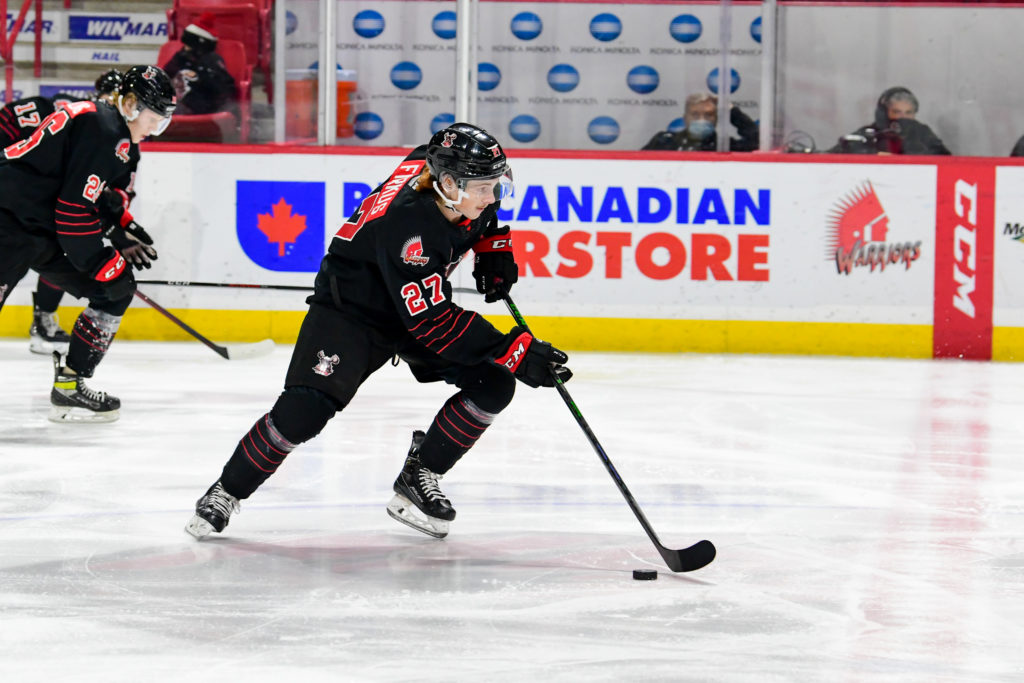 After collecting five out of a possible six points during a stretch of three games in four nights last week, the Moose Jaw Warriors are preparing for another busy week ahead.

Moose Jaw hosts the Brandon Wheat Kings at Mosaic Place on Tuesday for the first of four games in five days this week.

The Warriors finished last week on a high note with a 6-2 win over Swift Current on Saturday.

“That was our best, complete effort by everybody,” Warriors head coach Mark O’Leary said. “We played on the right side of the puck and it gave us opportunities and we capitalized.”

The Warriors were coming off a 2-1 overtime loss in Swift Current one night early, but were able to move past the loss quickly with a big victory.

“The boys were having fun, we’re enjoying it and we’re just making we’re hard on pucks, pressuring their d-men, creating turnovers and scoring on our chances,” Warriors forward Jagger Firkus, who had two goals and three points in Saturday’s win, said.

Firkus’ three-point night snapped a six-game point drought for the Warriors’ 17-year-old forward. He said it was a big bounce back performance.

“It was good to see our relentless effort and it was a good game,” he said. “My line, we were buzzing around, we were talking, we were loud and we were just having fun and that’s the biggest thing.”

In addition to Firkus’ finding his offensive game, the Warriors also had five different goal scorers in the game.

O’Leary said that was key to the team’s success.

“That’s the best thing as a coach when you look at the sheet after the game, at the ice times, and they’re about as even as they ever have been,” he said. “That’s a fun night for everybody, we had some guys have some big nights that don’t generally play as much.”

The Warriors will need to build off Saturday’s success when they take on the Wheat Kings.

Moose Jaw lost 4-2 in Brandon earlier this month in the first meeting between the two East Division rivals this season.

O’Leary said the Warriors need to play a tight game against Brandon.

“It’s a Brandon team that’s starting to find their stride right now,” he said. “They have all kinds of skill and like to transition fast off the rush, so we have to make sure that we have depth and we’re on the right side of the puck.”

Moose Jaw will also be keying in on Wheat Kings captain Ridly Greig, who has a team-high 12 goals in 15 games this season.

“There’s not really a time in the game where he doesn’t contribute, he kills penalties, plays power play and is their top-line centre, so he’s a guy that we need to know when he’s on the ice,” O’Leary said.

The Warriors and Wheat Kings meet at Mosaic Place on Tuesday night at 7 p.m.

After Tuesday’s game, the Warriors load up the bus and head to Alberta for three games in three nights against Calgary, Red Deer and Edmonton, starting on Thursday.