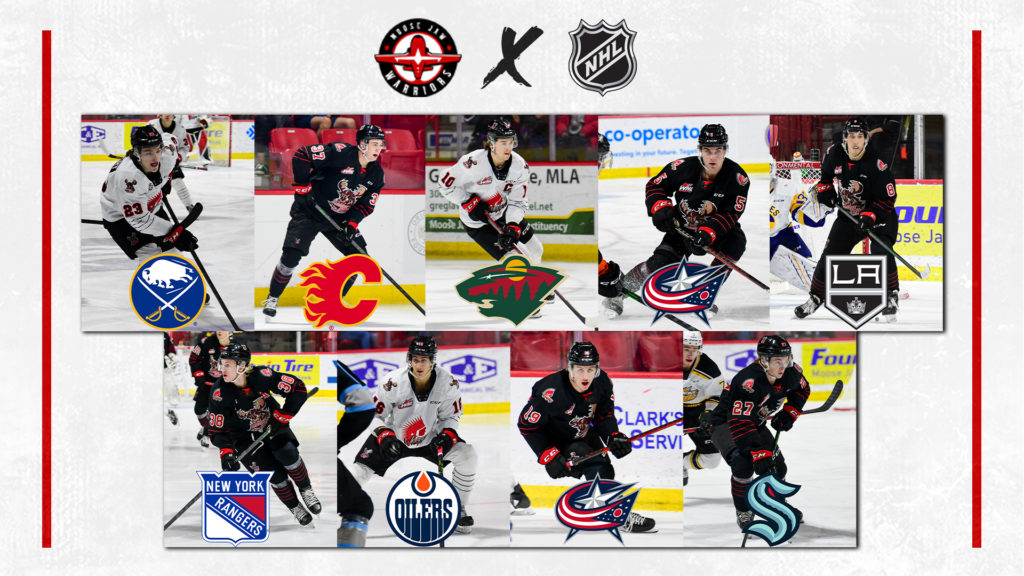 The Moose Jaw Warriors will be well represented at NHL training camps over the next few weeks.

Nine Warriors in total will be suiting up with eight different NHL teams, starting this week.

Mateychuk will be suiting with the Columbus Blue Jackets at the annual Traverse City NHL Prospects Tournament, which gets underway on Wednesday in Michigan.

The Dominion City, MB product was selected 12th overall by the Blue Jackets in the 2022 NHL Draft. He finished last season with 13 goals and 64 points in 65 games on his way to winning the East Division Defenceman of the Year award.

Rysavy will be joining Mateychuk with the Blue Jackets at the Traverse City Prospects Tournament.

The Czechia forward is attending his second training camp with Columbus after being selected in the seventh round of the 2021 NHL Draft.

Firkus is hitting the ice in Seattle for his first training camp with the Kraken after being taken with the 35th overall pick in the 2022 NHL Draft. The Kraken open with rookie camp, starting on Monday, Sept. 19.

Firkus, a product of Irma, AB, led the Warriors with 36 goals and 80 points in 66 games last season.

Atley Calvert is off to Buffalo for the 2022 Prospects Challenge with the Sabres after receiving a training camp invite. Click here to read more on Calvert.

The Moose Jaw product posted 15 goals and 40 points in 65 games last season with the Warriors.

Wanner is attending his second training camp with the Edmonton Oilers after being selected in the seventh round of the 2021 NHL Draft.

The Estevan, SK product will hit the ice for rookie camp starting on Wednesday in Edmonton and then travel with the team to Penticton, B.C. for the Young Stars Classic where the Oilers will take on the Winnipeg Jets, Calgary Flames and Vancouver Canucks.

Wanner had six goals and 23 points in 55 games last season with the Warriors.

Jordan will also be heading to the Young Stars Classic with the Flames, who selected him in the fifth round of the 2021 NHL Draft. This will also be his second training camp with Calgary.

Jordan and the Flames will kick off the tournament on Friday against the Canucks. They battle Wanner and the Oilers on Saturday and finish against the Jets on Sunday.

The Brandon, MB product was limited to 35 games last season, but put up two goals and 11 points over that stretch.

Alarie will be heading to his second NHL camp, this time with the Los Angeles Kings after attending rookie camp with the Florida Panthers last season.

The Winnipeg, MB product is suiting up with the Kings at the 2022 Rookie Faceoff, which gets underway on Friday in San Jose. Los Angeles takes on Colorado on Friday, Vegas on Saturday and San Jose on Monday.

Last season, Alarie finished with a career-high 25 goals and 58 points in 68 games.

Hunt will be at training camp with the Minnesota Wild for the second time after being drafted in the third round of the 2020 NHL Draft and signing with the team last summer.

The Calgary, AB product will hit the ice with the Wild at the 2022 Tom Kurvers Prospect Showcase in Chicago, which will see Minnesota take on the Blackhawks on Friday and Sunday.

Korczak opens rookie camp with the New York Rangers on Wednesday and then they will face-off with the Philadelphia Flyers in rookie games on Friday and Saturday in Allentown, PA.

The Yorkton, SK product was drafted by the Rangers in the third round of the 2021 NHL Draft and signed his entry-level contract last season.

In 68 games last season, Korczak had 25 goals and 79 points for the Warriors.

The Warriors continue the preseason this weekend with a home-and-home against the Brandon Wheat Kings.