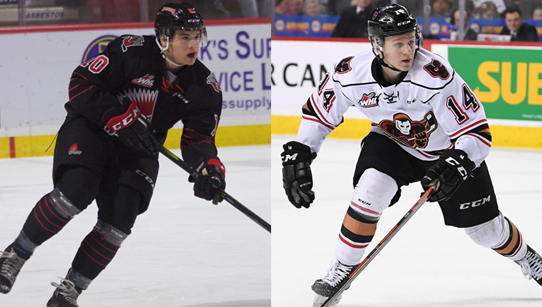 In his rookie season with the Warriors last year, Hunt had seven goals, 13 assists, and 20 points in 57 games.  Hunt was on Canada Black at the 2018 World Under-17 Hockey Challenge and he was an underage player with Canada at the 2019 IIHF World Under-18 Championships.

Korczak was acquired by the Warriors at the 2019 WHL Bantam Draft, last season with the Calgary Hitmen, the Yorkton product had eight goals, seven assists, and 15 points in 50 games.  In the 2019 WHL Playoffs, he had two goals and five points in 11 games.

The duo will be joined by Warriors General Manager Alan Millar and Associate Coach Mark O’Leary.

Millar is apart of Hockey Canada’s Management Group and was with the Under-18 team that captured gold at the 2018 Hlinka Gretzky Cup in Edmonton.  O’Leary was an Assistant Coach at last year’s 2018 World Under-17 Hockey Challenge and has been a camp coach at the Under-18’s in past years.

In total, 44 players received invitations to the camp which runs July 26 to 30 at the Markin MacPhail Centre at WinSport’s Canada Olympic Park in Calgary.

The Hlinka Gretzky Cup will be held August 5 to 10 in the Czech Republic and Slovakia.

Canada captured gold at last year’s event and was won gold 22 times in the 28 years of the summer under-18 competition.