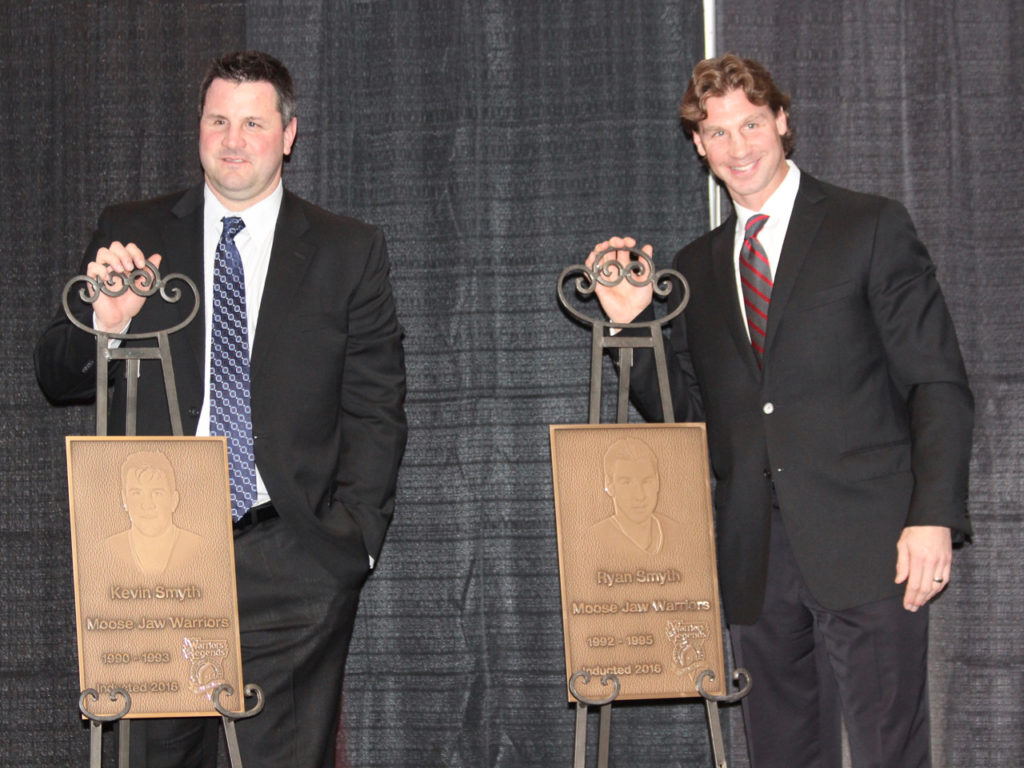 The Smyth brothers were inducted into the Warriors and Legends Hall of Fame during the 2017 induction ceremony at the Heritage Inn to kick-off Hall of Fame Weekend.

“It’s quite flattering and humbling,” said Ryan Smyth on his induction.  “To go in with my brother at the same time is very unique, I learned a tremendous amount from him in regards to the level and how to compete, and I’m very honoured.”

Both Smyth brothers played three seasons each in Moose Jaw, including one season together during Kevin’s 19-year-old season and Ryan’s 16-year-old year.

Kevin Smyth played 201 games in a Warriors’ uniform from 1990-93, finishing with 104 goals and 242 points, which ranks seventh all-time in franchise history.

“This is where it all started for me,” said Kevin Smyth.  “This is a really big honour today for me and my family for sure.

“I never expected to go into the Hall of Fame, I didn’t have that kind of career, but to go in with Ryan is very special.  To put closure on every now is very cool.”

Kevin Smyth said that there was one memory that really sticks out for him during his time with the Warriors and it was during his one season playing with his brother.  Kevin finished with five goals in the game and Ryan played a big part in it.

“He was 16 and I was 19 and we were playing in Lethbridge and I think he actually fought somebody that hit me from behind,” said Kevin.  “There’s lots for really good memories.”

Ryan Smyth was able to put together a stellar career with the Warriors as well, posting 110 goals and 224 points in 188 career WHL games.  He sits 13th on the franchise’s point list.

Ryan is remembered now more for what he was able to after his time in Moose Jaw, playing 1,270 games in the NHL with the Edmonton Oilers, New York Islanders, Colorado Avalanche and Los Angeles Kings.

Ryan said that his time in Moose Jaw helped set him up for that success as a professional.

“I’m grateful for the Warriors’ organization for drafting me, for sticking with me for three years and it all started right here,” said Ryan Smyth.  “You’ve got to go back to your grassroots, it’s not only minor hockey, the junior ranks helps you build that stamina for the NHL-level.”

Know as “Captain Canada” after representing his country on numerous occasions at international tournaments, including winning an Olympic gold medal in 2002, as well as captaining Canada a record six times at the World Championship.

Smyth’s heart was a big part of his game and he said he learned that from his older brother.

“You look like players like Milan Lucic, the power forwards that they talk about, Kevin was that, he had the size, the ability, the speed, he was one of the best guys along the wall that could hold that puck and nobody could take it off him,” said Ryan Smyth.

“Not only did we compete in the drive-way and in minor hockey, but we competed for one another to push each other to be better and I wouldn’t be here today without my brothers helping me.”

Kevin Smyth now lives in Red Deer, Alberta where he owns the Smyth Real Estate Team, while Ryan Smyth remains in Edmonton and is playing Senior Hockey with the Stoney Plain Eagles.

Both inductees will be on hand for the annual Hall of Fame Game on Saturday night when the Warriors host the Medicine Hat Tigers at Mosaic Place.  Puck drops at 7 p.m.