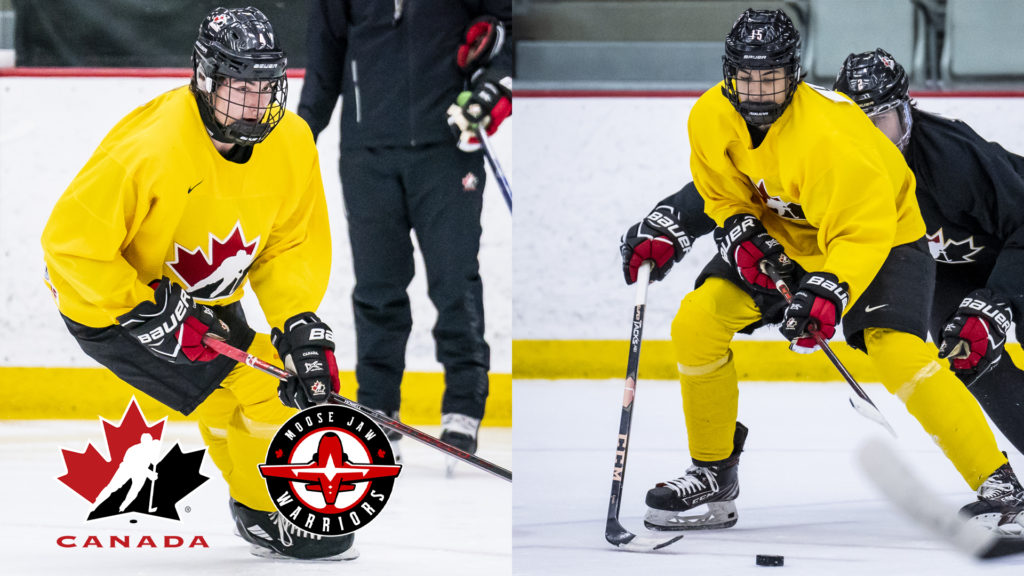 Two Moose Jaw Warriors draft picks had the opportunity to measure themselves against the best players from across the country last week.

“It was definitely special,” Howell said on his first camp with Hockey Canada.

The Warriors’ top two picks in the 2021 WHL Prospects Draft played together with Team Gold during the camp scrimmages, finishing 2-2 in their four games.

Howell had a solid showing at the offensive end with two goals and three points in four games, including the game-winning goal for Team Gold in a 3-2 win over Team Black.

He said it was a great experience going against Canada’s best players in his age group.

“You hear all this stuff about this guy from Quebec, this guy from Toronto and finally getting to play against them was awesome,” Howell said.

Lakovic had one assist in four games for Team Gold.

He said he was honoured to take part in last week’s camp.

“It was definitely something special,” Lakovic said. “Growing up, I always dreamed of wearing the maple leaf… it was awesome.”

Lakovic is a second round pick by the Warriors, who played in one game with the team last season.

He said he feels he matched up well with Canada’s best.

“I definitely surprised myself a little bit,” Lakovic said. “Seeing how I compared against kids from Ontario and Quebec was definitely something cool.”

Howell and Lakovic were joined by Warriors head coach Mark O’Leary at the camp.

The Warriors’ duo said it was fun to take part in the camp on the same team.

“It was really nice, I’ve got to know Lakovic over the past few months,” Howell said. “To have that chemistry from the get-go was awesome.”

“It was awesome,” Lakovic said. “He played really and was just a beauty on and off the ice.”

Howell, a first round pick, played in five regular season with the Warriors last season, posting a goal, two points and a plus-two rating.

By showing his two-way ability during the camp, the six-foot-three defenceman said he was happy with how he showcased his development over the past year.

“I felt like the coaches were really supportive on letting you showcase your skill, but at the same time playing their way,” Howell said.

Lakovic had 19 goals and 27 points in 33 games with the West Van Academy under-18 prep team.

He said he’s been working hard this offseason to get ready for the past week and his first trip to training camp with the Warriors.

“I have been working on my board work and just my speed with off the ice workouts, working on acceleration and getting stronger,” Lakovic said.

“I’m pumped, I feel like I’ve definitely improved since last time I was with the Warriors and I’m only going to get better and better.”

Next up for Howell and Lakovic is training camp with the Warriors in late August.

Brayden Yager and Jackson Unger will be hitting the ice for Hockey Canada’s under-18 selection camp this week, looking to secure spots with Team Canada for the Hlinka Gretzky Cup later this month in Red Deer, AB.

Coming up this weekend, Jagger Firkus and Denton Mateychuk will take part in the 2022-23 national junior team summer camp in Calgary.