Firkus streaking as the Warriors head into Kamloops 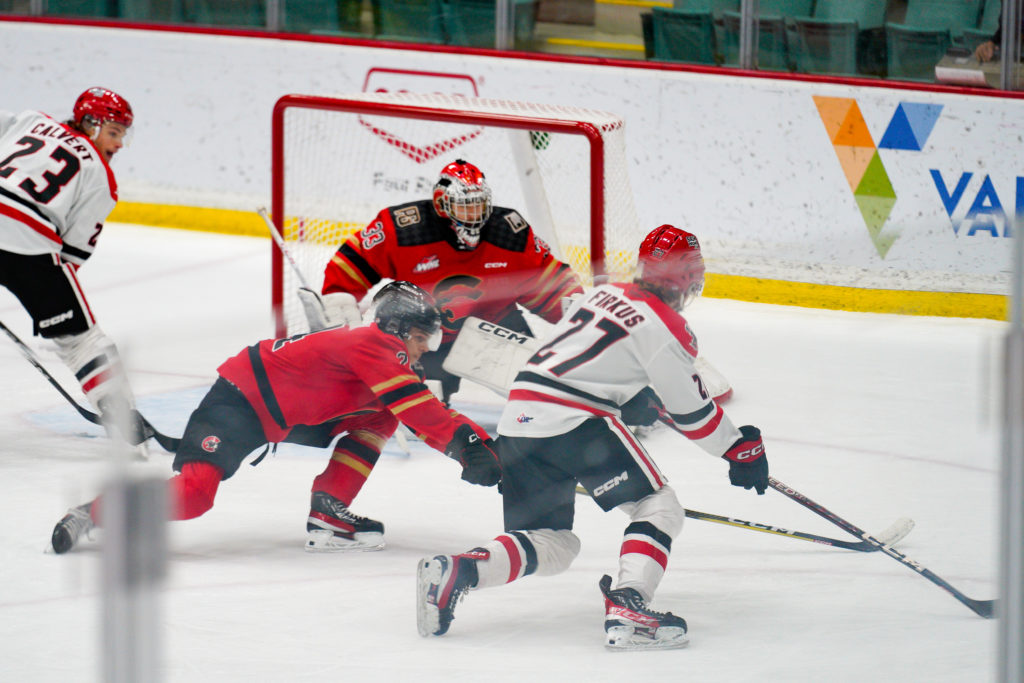 Kamloops, B.C. — The Firkus Circus has been a nightly show over the past month.

Jagger Firkus has been on a roll for the Moose Jaw Warriors, putting together a 15-game point streak, collecting 10 goals and 21 points over the course of the streak.

“Right now, pucks are going in and things are going well for me, so if it keeps happening, it comes from me working hard,” Firkus said on Thursday in Kamloops.

“I did hear about it, but it’s not something really in the back of my mind when I’m going into the game or anything like that.”

The Seattle Kraken second round pick led the Warriors in scoring last season with 36 goals and 80 points in 66 games. Through 20 games this season, he has 12 goals and 26 points, while only being held without a point in two games.

After attending the Kraken’s training camp, Firkus said he wanted to help his teammates by taking his game to the next level.

“That’s something that great teammates do, they bring their teammates with them when they’re rolling,” he said.

With 10 goals and 11 assists over the course of his 15-game point streak, Firkus is showing his ability to be a playmaker as well as a goal scorer.

“I can shoot the puck and I believe in my shot, but there’s also playmaking ability with me as well,” he said.

Firkus extended his point streak on Wednesday, despite the Warriors falling 5-2 in Prince George to open the team’s seven-game road trip to the B.C. Division.

“There’s a lot of good in that game, we came out flying, we had a good first 10 minutes and after that, I don’t really think we got back to our game,” he said.

On a long road trip, Firkus said the Warriors need to shake off the opener and get back to their game.

“[Consistency] is everything right now,” he said. “Going into Kamloops, they’re a good team and then you have to play Kelowna the next night, so you have to be ready and you have to recover well.”

This is Firkus’ first time on a cross-conference road trip in his WHL career. He said he’s been looking forward to the trip for a long time.

“I love being around the guys,” he said. “As the road trip goes on, we’ll get more comfortable with each other and it’s a good time for all of us to lean on each other.”

Firkus and the Warriors face-off with the Kamloops Blazers on Friday night and then travel to Kelowna to battle the Rockets on Saturday. Puck drops on both games at 9 p.m.

Tune into Voice of the Warriors James Gallo from the road on Country 100 and WHL Live. The Pre-Game Show hits the air at 8:40 p.m.