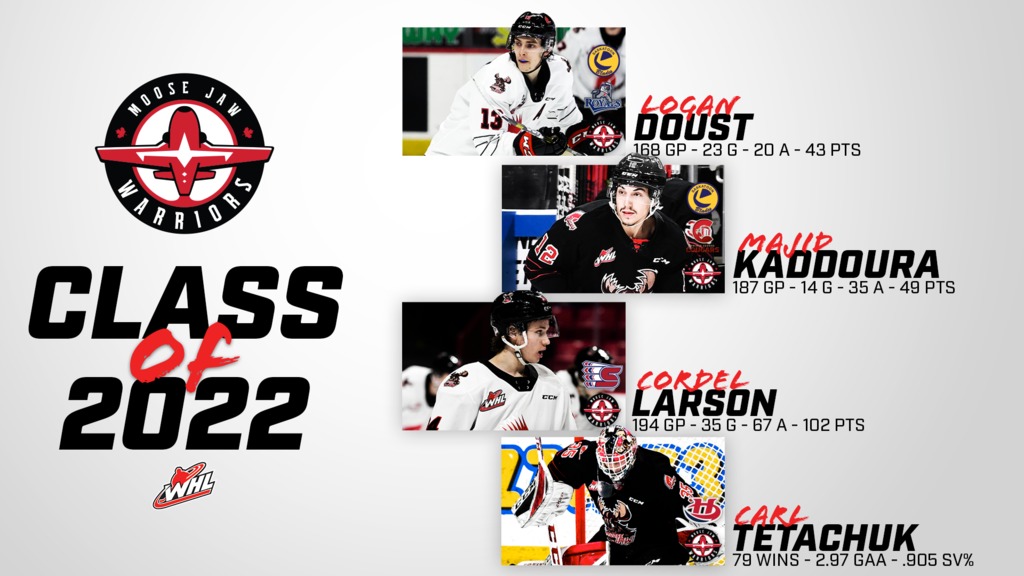 Throughout the month of August, we’re celebrating the class of WHL Graduates from the 2021-22 season. Join us as we go Club by Club in recognizing the achievements of the 20-year-old players from this past season moving on to access their WHL Scholarship or to professional hockey.

We continue our 22-part series with the Moose Jaw Warriors and their graduating quartet of Logan Doust, Majid Kaddoura, Cordel Larson and Carl Tetachuk.

Logan Doust
Originally selected in the ninth round of the 2016 WHL Draft by the Saskatoon Blades, forward Logan Doust skated with three WHL Clubs over his 178 reuglar season and playoff games.

Doust, from North Vancouver, B.C., made his WHL debut for the Blades at Lethbridge in November of 2017, but would appear in just two more games with Saskatoon before being traded to the Victoria Royals.

He broke into the League on a full-time basis in 2018-19 with Victoria, scoring his first WHL goal November 18, 2018 at Vancouver. Doust would finish the regular season with six goals, adding three helpers in 10 playoff outings with the Royals in the spring of 2019.

The right-shooting forward put up nine points in the first half of the 2019-20 season before again finding himself on the move as part of a blockbuster deal with the Moose Jaw Warriors. Over the final 26 games of the campaign, Doust scored seven times, including his first career multi-point game at Saskatoon February 9, 2020.

Doust finished his WHL career as part of Moose Jaw’s leadership group. Limited to just 24 games in 2021-22, he put up nine points including a pair of power-play markers, and despite being sidelined returned to the Friendly City to help the Warriors along in their return to the WHL Playoffs this past spring.

20-year-old forward Logan Doust, who had his season end due to injury surprised the team before Game 1 tonight#WeAreRelentless | #WHLPlayoffs pic.twitter.com/E1D5YUgSgr

Majid Kaddoura
Like Doust, defenceman Majid Kaddoura also began his WHL career with the Saskatoon Blades after being signed by the Club in 2017.

The product of Chestermere, Alta. spent four seasons patrolling WHL bluelines beginning in the 2018-19 season, where he made his debut October 2, 2018 at Red Deer. Kaddoura’s first goal came in Saskatoon’s final game of 2018, a 9-3 victory at Swift Current.

In all, Kaddoura played in 79 regular season and playoff games for the Blades before a move west to the Prince George Cougars midway through the 2019-20 season.

Offensively, Kaddoura enjoyed his best points-per-game average with the Cougars in 2020-21, recording nine points in 22 games.

An early-season move saw the 6-foot-3 rearguard land in Moose Jaw in the fall of 2021, and over the course of 62 games Kaddoura proved to be an anchor on the Warriors blueline, compiling 24 points.

Kaddoura featured in all 10 of Moose Jaw’s contests in the 2022 WHL Playoffs, scoring his first WHL post-season goal in their playoff opener, a 5-1 win over Saskatoon.

Cordel Larson
Larson appeared in 218 WHL regular season and playoff games, the vast majority coming in a Spokane Chiefs uniform. Larson was a ninth-round pick of the Chiefs in the 2016 WHL Draft and made his debut with Spokane February 7, 2018 at Kamloops.

His first WHL point was a goal, coming November 3, 2018 in a home contest versus the Everett Silvertips. Over 58 games in 2018-19, Larson collected 14 points before adding a pair of assists in the Chiefs’ run to the Western Conference Championship series.

2019-20 proved to be the most productive offensive season for the product of Weyburn, Sask. Larson scored 15 times, earning 43 points including a trio of three-point games against Victoria, Tri-City and Portland.

Over his final 47 games with Spokane, Larson added 28 points to his career total. He found himself on the move for the first time as a WHL player in January of 2022, as he was dealt to the Moose Jaw Warriors.

In Moose Jaw, Larson made an immediate impact, scoring twice on his debut versus the Calgary Hitmen, finishing the season with 17 points from his final 22 games. Larson’s first and only WHL Playoffs goal was a Game 3 overtime winner for the Warriors at Saskatoon, part of a series won by Moose Jaw in five games.

🎥HIGHLIGHT OF THE NIGHT🎥

Carl Tetachuk
Three of Carl Tetachuk’s four WHL seasons were spent as a member of his hometown Lethbridge Hurricanes, but as a Moose Jaw Warrior, the netminder set career bests in wins and save percentage.

Tetachuk was signed by the Hurricanes in 2018; he earned his first WHL victory on October 23 of that year versus the Brandon Wheat Kings, making 34 saves in his home debut.

His first shutout came exactly four months later in Medicine Hat, as Tetachuk turned aside all 35 shots he faced. He’d go on to post a 24-9-1-0 record over his rookie WHL season before appearing in seven post-season contests that spring.

Tetachuk put up a 2.82 goals-against average over 41 games in 2019-20, winning 21 times and recording shutouts against Moose Jaw, Vancouver and Calgary.

After 17 games during the 2020-21 campaign, Tetachuk was dealt to the Warriors ahead of his 20-year-old season.

He’d go on to appear in a career high 53 games in 2021-22, collecting a 29-14-4-3 record, .913 save percentage and a trio of shutouts including a 1-0 shootout loss and shutout at the Enmax Centre against his former Hurricanes teammates.

Tetachuk won four games for Moose Jaw during the 2022 WHL Playoffs, completing his WHL career with 86 regular season and playoff victories. He was named to the East Division Second All-Star Team to cap off his time in Moose Jaw, and in the WHL.