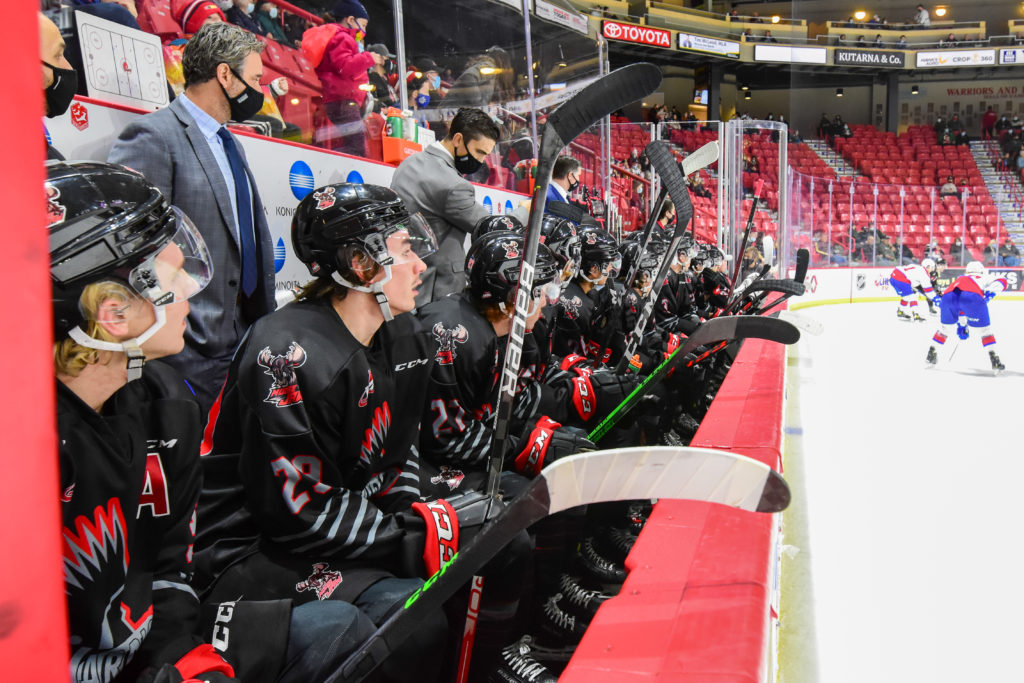 Getting the opportunity to represent Canada is an honour whether you’re a player or a coach.

Moose Jaw Warriors assistant coach Gord Burnett will have that opportunity this week as he coaches Canada Red at the 2021 Capital City Challenge in Ottawa.

“I’m really excited about it, there’s a lot of positives, and it will be fun to get going,” Burnett said before leaving for Ontario.

Burnett will be joined by Warriors forward Brayden Yager and goalie Jackson Unger on Canada Red at the tournament, which gets underway on Friday.

Burnett has previously worked with Hockey Canada at the Under-17 summer camp twice and has also coached with Saskatchewan’s provincial team on three occasions.

He said getting the opportunity to work with Team Canada will make for a special week.

“Although it’s a unique tournament with just Canadian teams there this year, it’s still an opportunity to represent you country,” Burnett said. “You work with a lot of great people — the staff, the players, the support staff, the management staff, they’re all great people.

“There’s a lot of pride with everybody that’s there, including myself, and at the end of the day, we all still want to win.”

The top 2005-born players in Canada will make up three teams at the tournament and they will compete against Canada’s national women’s team.

The teams will play three round robin games before the medal round next week.

Burnett said coming together off the ice quickly will be key for each team with such a short time frame together.

“All 66 players deserve to be there because they’re really good players with bright futures in the game, but the coaches job primarily is to make them play together as team,” he said. “That’s the biggest challenge that the coaching staff faces in a short term competition like this.”

In addition to Yager and Unger, Canada Red has five other players from the Western Hockey League, which Burnett said will help them come together and find an identity quicker.

He said being familiar with Yager and Unger will also be a benefit for him.

“Knowing the player as a person helps and you can communicate a little bit better with them, but I think that helps them do that too,” Burnett said.

“I’m excited to have those two on our team for sure, I’d rather be with them than against them.”

Burnett is hoping to use this experience with Hockey Canada to improve himself coming back to Moose Jaw for the rest of the season.

“It’s always important to be networking with these coaches because all the staff are good coaches, so hopefully I can network with them, stay connected with them and learn from them,” he said.

“I also want to know all the players, especially in the West, because as we go, these kids are 16 in this league, they’ll be in this league for a long time, so the better you can get to know them than you know what you’re facing.”

Burnett, Yager, Unger and Canada Red hit the ice for their opening game at the Capital City Challenge on Friday against Canada Black.

Canada Red will take on the Canada’s national women’s team on Saturday night.

They finish their preliminary round play against Canada White on Sunday afternoon.

The semifinal is next Tuesday and that’s followed by the medal games next Wednesday.