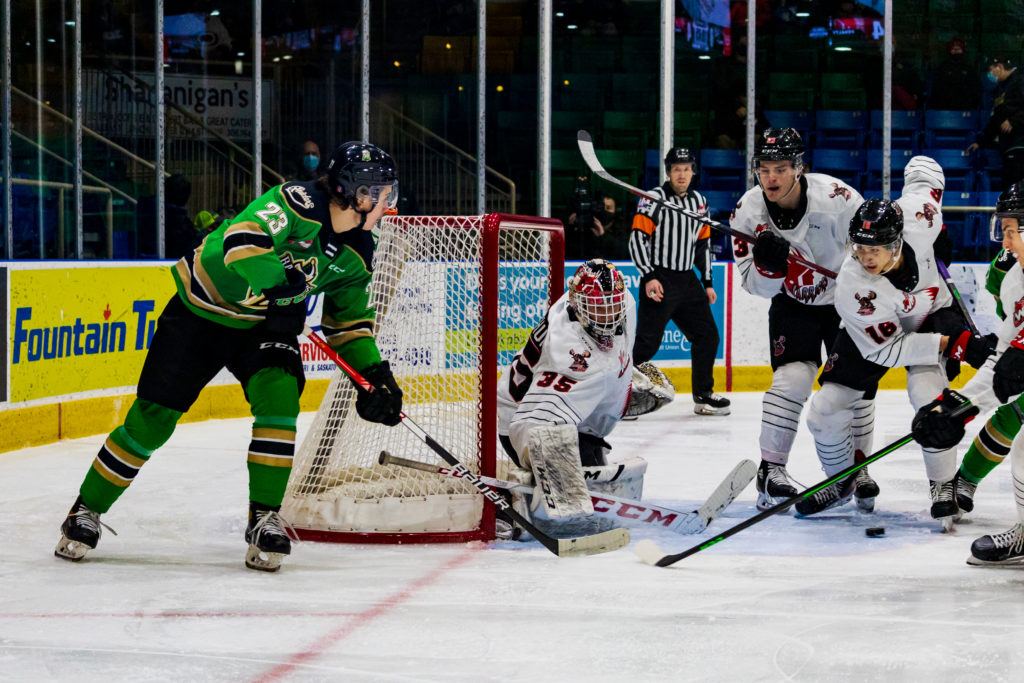 The Moose Jaw Warriors started a busy week on the right foot with a 4-1 win over the Raiders in Prince Albert on Wednesday night.

Eric Alarie had a goal and four points in the first period and Carl Tetachuk did the rest, making 50 saves to backstop the Warriors to the win.

Atley Calvert added three assists and picked up first star for Moose Jaw in the victory.

Alarie opened the scoring, burying a rebound in front of the net for his fifth of the season, only 1:15 into the game.

Just over six minutes later, Warriors captain Daemon Hunt extended the lead to 2-0 with his sixth of the season.

Another six minutes later, Logan Doust scored his second in as many games to put the Warriors in front by three.

Logan Doust gets his second of the season to make it 3-0!

Max Wanner would finish off the first period onslaught with his first Western Hockey League goal, scoring on another rebound chance for the Warriors to make it 4-0 after one.

Prince Albert responded with a strong second period, including a goal disallowed after being tipped in with a high stick. The Raiders outshot the Warriors 28-25 after 40.

The Raiders continued to press in the third period and picked up a power play goal from Tyson Laventure just past the midway point of the period, but that was as close as they would get.

Tetachuk finished with a career-high 50 stops, including 22 in the third period, to help Moose Jaw snap a two-game losing skid.

The Warriors will now get ready for a weekend home-and-home series against the Swift Current Broncos, starting on Friday at the Credit Union iPlex in Swift Current.

Then, Moose Jaw hosts Swift Current on Saturday night at Mosaic Place. Get your tickets today at mjwarriors.ca or the Mosaic Place Box Office.