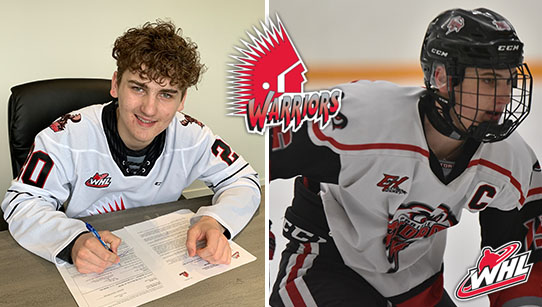 Moose Jaw Warriors General Manager Alan Millar has announced that 2020 drafted forward Ben Riche (2005) has committed to the Warriors and the Western Hockey League with the signing of a Standard Player Agreement.

“We are very excited to announce the signing of forward Ben Riche to a WHL Standard Player Agreement.  Ben brings speed, competitiveness, and character to our hockey club,” commented General Manager Alan Millar.  “We are pleased that Ben and his parents Troy and Manuela have chosen the Moose Jaw Warriors and the WHL to pursue his hockey and academic goals.”

“Ben brings a lot of speed to our draft class.  He’s a strong, powerful skater and plays a 200-foot game.  He shoots the puck hard and will contribute offence.  He was the Captain of his team, showing leadership and competitiveness,” said Assistant General Manager Jason Ripplinger.