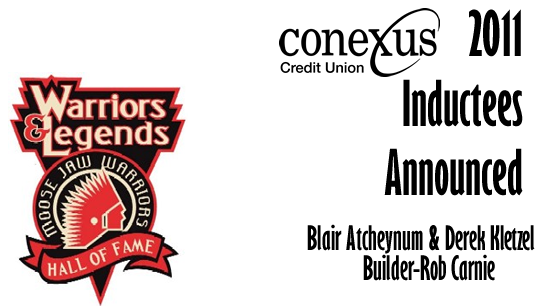 Moose Jaw, SK—The Moose Jaw Warriors and Conexus are proud to announce the 2011 Warriors and Legends Hall of Fame Inductees as Blair Atcheynum and Derek Kletzel.  The induction banquet is set for August 19th with a golf tournament following on Saturday August 20th to wrap up the Alumni weekend presented by Conexus.

The Warriors will welcome two deserving inductees to the wall this August. Blair Atcheynum spent three seasons as a Warrior from 1986-1989.  In that time he played in 143 games notching 105 goals and 84 assists for 189 points during his Warriors career.  Blair still holds the Warrior record for most goals in a season with 70 in 1988-89.   Blair went on to an extensive professional career in both the AHL and NHL.  The Estevan born hockey star, played in 169 NHL games with the Ottawa Senators, St. Louis Blues and was part of the first Nashville Predators team in the 1998 Expansion draft as well as the Chicago Blackhawks.  A draft pick of the Hartford Whalers in 89, Blair’s passion for hockey lead him to a successful pro career that ended in 2001.

Derek Kletzel, a four year Warrior veteran and captain; put on the red and black from 1988-1992.  Derek played in 190 games, banking 83 goals and 100 assists during his WHL career. Derek attended Acadia University in 1992 to 1994 and the University of Regina in 1994-1996 to earn his Bachelor of Physical Activity Studies (BPAS).  Since 1997, Derek has been a Kinesiologist and part owner at Julien’s Fitness and Rehab in Moose Jaw.  Derek continues to support the Moose Jaw Warriors through his dedication to the Alumni Committee and as the color commentator for Warrior home games.

This year’s builder inductee is 15 year radio broadcaster, Rob Carnie.  Calling over 800 games from 1986 through 2001, Rob entertained Warrior fans over the air waves and has made a lasting impression on all those who know and love his signature voice.

To purchase tickets or register for the Alumni Weekend presented by Conexus, please call 306.690-1652 or email specialevents@mjwarriors.com

Tickets are on sale at the Co-op Administration Office 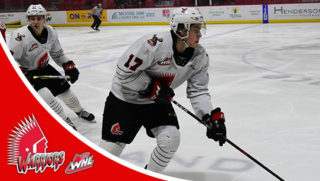 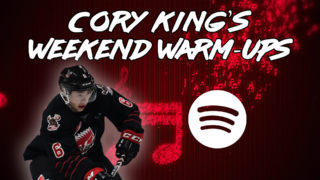 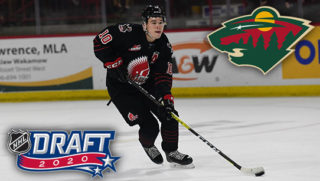