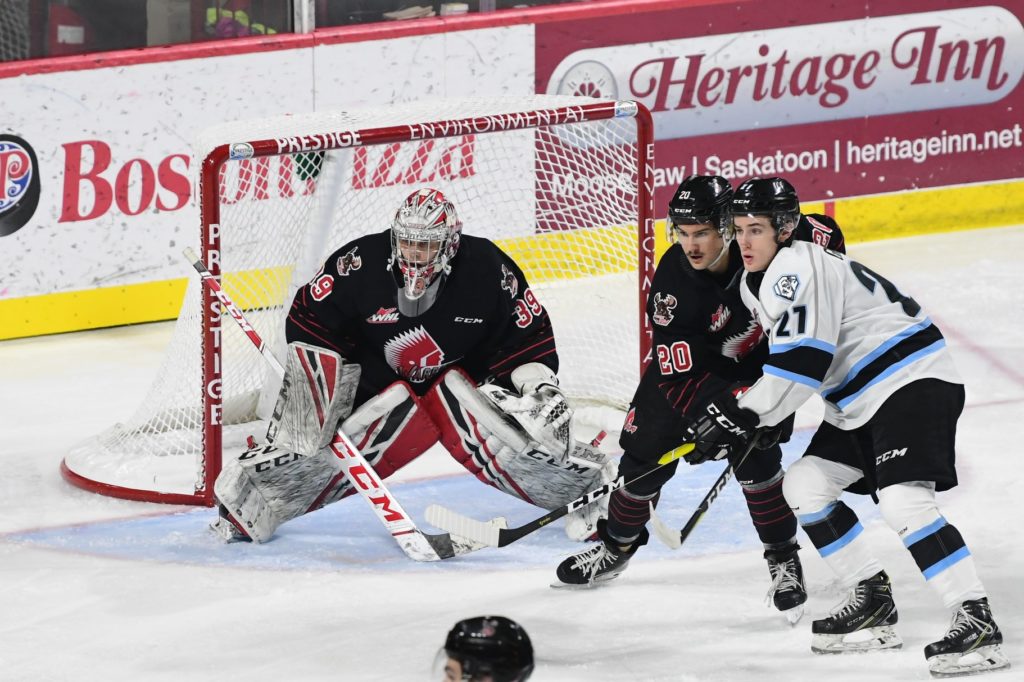 The Moose Jaw Warriors started strong and battled hard all game as they held on for a 3-2 win over the Winnipeg ICE Friday at Mosaic Place.

Both teams pushed hard in the first period.  Offensively, they came up the ice with speed and were able to win battles along the boards and force puck to the net.

Moose Jaw outshot the ICE 15-10 in the opening period and took a 1-0 lead just in front of the four-minute when they set up Carson Denomie for a one-time inside the right circle while working on the power-play.

In the second period, the teams continued to push quickly up the ice and were able to create quality scoring chances.

With just over three minutes left in the period, Ryder Korczak had the puck in the Winnipeg left corner and tossed it to the top of the crease for Brayden Tracey.

Tracey was hooked up and unable to get a clean shot but the puck rolled to Alek Sukunda at the bottom of the right circle where he put a quick shot past goalie Jesse Makaj, his first of the season gave Moose Jaw a 2-0 lead.

Winnipeg was able to respond inside the final minute of the second period when they landed on a 5-on-3 power-play.  They were able to set up Michal Teply inside the right circle where his power-play goal pulled the ICE to within one.

Close to six minutes into the third period the Warriors extended their lead.

Moose Jaw dumped the puck to the Winnipeg end-boards and Owen Hardy went crashing on the fore-check.  The 20-year-old fought the puck away from the ICE in the left corner and then tossed the puck cross-ice to the top of the right circle.

17-year-old defenceman Cory King grabbed the puck and puck a quick shot towards the net, his first WHL goal gave the Warriors some breathing room.

As the third period continued, the ICE pressed harder.

Winnipeg outshot the Warriors 16-3 in the third period and they were able to get back to within one on a goal from Connor McClennon with 99 seconds left in the period but that would be as close as they would get.

Adam Evanoff made 36 saves for the Warriors while Brayden Tracey picked up two assists.

The Warriors weekend continues at Mosaic Place Saturday with their first meeting of the season against the Swift Current Broncos.  Tickets are available at the Mosaic Place Box Office or online at www.mjwarriors.ca.

Catch all the action on Country 100 starting with the PreGame Show at 6:40pm.