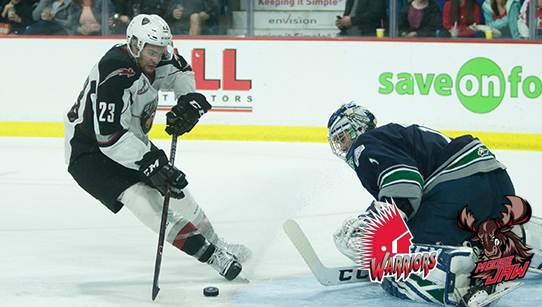 Moose Jaw Warriors General Manager Alan Millar has announced the acquisition of 20-year-old forward Jadon Joseph from the Vancouver Giants in exchange for a 3rd round pick in 2020 and a conditional 5th in 2022.

“We are very pleased to add Jadon Joseph to our hockey club.  Jadon is a strong, hard, two-way player who can also contribute offensively,” said Millar.  “He has a relentless work ethic and brings a very strong character to our team.  He will complement our young group very well.  Jadon’s league-best 58 playoff games played over the past three seasons is impressive.”

From Sherwood Park, Alberta, Joseph has played in 189 regular-season games and has 34 goals, 66 assists, and 100 points.  He’s also played in a league-best 58 WHL Playoff games over the past three seasons recording has 12 goals, 15 assists, and 27 points.

The Moose Jaw Warriors open the 2019 – 2020 regular season Friday, September 20th in Regina, the following night they’ll battle the Pats in their Home Opener.  2019 – 2020 season tickets and flex packs are available now at the Warriors Office.